The $1 million gift will enhance CCM’s J. Ralph Corbett Distinguished Chair in Opera, the first chair of its kind in the United States

CINCINNATI – November 4, 2014 – The Corbett Foundation, established in 1955 by J. Ralph and Patricia Corbett, has donated $1 million to the University of Cincinnati College-Conservatory of Music (CCM) to benefit the J. Ralph Corbett Distinguished Chair in Opera. The gift is the final one to be dispersed by the Corbett Foundation, which closed its doors in August.

“This final act of generosity by the Corbett Foundation, which announced its closure earlier this fall, will strengthen an already unparalleled opera program at CCM,” said Peter Landgren, Dean and Thomas James Kelly Professor of Music at CCM.

“For decades, the Corbetts’ support has helped to usher countless students from the CCM stage to the stages of some of the world’s most famous opera houses and concert halls,” said Landgren. “This gift will ensure that generations of students enrolled in CCM’s opera program will follow in the footsteps of some of CCM’s most accomplished alumni. We are eternally grateful to the Corbett Foundation.”

The internationally renowned opera department at CCM boasts one of the most comprehensive training programs for opera singers, coaches and directors in the United States. In 1982, the Corbett Foundation made a gift to establish the J. Ralph Corbett Distinguished Chair in Opera, which was the first chair of its kind at any university in the United States.

The chair provides scholarships for graduate students studying voice and coach accompanying, support for touring productions, an archive and partial funding of a distinguished professional in opera. Accomplished Metropolitan Opera stage director Robin Guarino has held the position since August 2008.

“CCM ranks among the top schools for performing arts in the nation, and its success is thanks in large part to donors like the Corbett family,” said UC President Santa J. Ono. “I am thankful for the Corbetts’ support and proud of the achievements of our faculty, staff, alumni and students who inspire us onstage and behind-the-scenes with their talents.”

The Corbett Foundation has left an incredible legacy that will be felt for years to come at UC. Over the years its gifts to the university have created the Corbett Center for the Performing Arts, Corbett Auditorium, Patricia Corbett Theater, the J. Ralph Corbett Audio Production Center, the Robert J. Werner Recital Hall, several distinguished chairs and an endowment for the theatre design and production program.

“The Corbett family is a tremendous example of the impact private support can have not only on UC but on the entire Greater Cincinnati community,” said Rodney Grabowski, UC Foundation president. “Thank you to everyone who has been involved with the Corbett Foundation over the years. UC is stronger because of you.”

J. Ralph Corbett, founder of the electrical manufacturing company NuTone and later the Corbett Foundation, was a staunch patron of the performing arts, medicine and education. In 1963, he was awarded a Doctor of Humane Letters degree from UC and was recognized with a Great Living Cincinnatian award in 1970. He passed away in 1988, but his legacy lives on at CCM and the Cincinnati arts community. 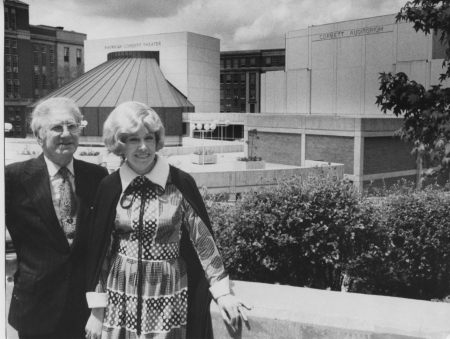 About the University of Cincinnati College-Conservatory of Music
A preeminent institution for the performing and media arts, CCM is the largest single source of performing arts presentations in the state of Ohio. The school's roster of more than 150 internationally recognized faculty members work with students from around the world, specializing in seven areas including electronic media, ensembles and conducting, keyboard studies, music education, theatre arts, performance studies and composition and theory. For more information, please visit ccm.uc.edu.