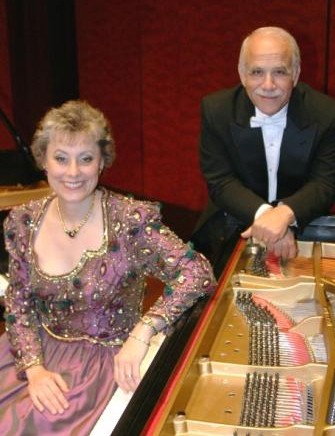 In 1982, Eugene and Elizabeth Pridonoff formed the Pridonoff Duo, making their formal debut with the Cincinnati Chamber Orchestra under the direction of Paul Nadler. They were appointed Duo-in-Residence at CCM in 1986, shortly after they gave their debuts at New York's Alice Tully Hall and the Kennedy Center in Washington, D.C. They have since performed extensively throughout the United States, Europe, Mexico, China, Hong Kong, Japan, Taiwan and Korea. The New York Times has described their sound as "buoyant and rhythmically alive [and] marked by impressive unanimity of attack."

"We are particularly excited to perform with Percussion Group because we made our Alice Tully Hall debut with them in 1986," said Eugene Pridonoff.

Continued Mr. Pridonoff, "Special arrangements of 'Rite of Spring' and 'Mother Goose' for two pianos and percussion are the result of Al Otte's ingenious application of orchestral materials into the percussion parts, giving the works unusual color and effectiveness."

Eugene Pridonoff has maintained an international performing and teaching career since 1965 when he was a laureate in the Leventritt, Montreal, Brazil, and Tchaikovsky competitions. That same year, he was appointed to the piano faculty of Temple University and in the ensuing decades established himself internationally as one of the leading performing pedagogues.

Pridonoff has given solo and duo recitals and performed with orchestras throughout the world. He has been featured on NPR's 'The Sunday Show' and with Bill McGlaughlin of 'Saint Paul Sunday,' and has given chamber recitals with Lynn Harrell, Leonard Rose, Jaime Laredo and Peter Wiley. In March 2005, he and his wife Elizabeth were interviewed and featured on the cover of Clavier magazine.

Formerly on the faculties of Iowa State and Arizona State Universities, Eugene Pridonoff has recorded for the Vienna Modern Masters label. He was appointed an International Steinway Artist in 2004. He has been a faculty member at the College-Conservatory of Music since 1980.

Elizabeth Pridonoff is an internationally known teacher and pianist who has performed and given master classes throughout the world. A graduate of The Juilliard School, she received her M.M. degree in both piano and voice. She studied piano with Sasha Gorodnitski and Adele Marcus, and voice with Hans Heinz. She also holds a B.M. from George Peabody College for Teachers, Vanderbilt University.

In the United States, she has appeared with the Nashville Symphony, Oklahoma City Symphony, Shreveport Symphony, El Paso Symphony, Cincinnati Chamber Orchestra, Northern Kentucky Symphony, Middletown (Ohio) Symphony, Boise Philharmonic, Illinois Philharmonic, and the New Philharmonic Orchestra of Irving (Texas). A first-place winner of several national and international competitions, she and her husband Eugene were featured with a cover photo and interview in Clavier magazine.

Active as a clinician, adjudicator, and lecturer, she has been a participant at the World Piano Pedagogy Conferences as performer (1996), co-chair of the Committee on Performance (1996-2000), and Interactive Sessions at the Fort Worth and Orlando Conferences in 1998 and 2001.

During the summers, she is on the faculty of the Amalfi Music and Arts Festival in Italy, the Barcelona Piano Festival, International Piano Week in Belgium, and has been invited to join the faculty at the Catania International Piano Festival in Sicily. Pridonoff has been a member of the piano faculty at the College-Conservatory of Music since 1982 and is a Steinway artist.