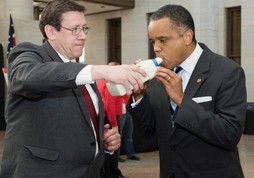 Applied research from the University of Cincinnati took center stage on March 16 as UC researchers and their industry partners provided Ohio legislators with up-close, hands-on exhibits of ongoing research projects with proven or strong potential for economic benefit to the state. The event was held at the Columbus Statehouse.

The event focused on UC research that

According to Sandra Degen, vice president for research, the event and the projects on display are real-world examples of UCs research leadership and why the university ranks among the nations elite of public research-intensive universities based on National Science Foundation data on federal research expenditures. Currently, UC research funding from both private and public sources is at an all-time high of $378 million.

The projects on display during the Statehouse Showcase were

Anastasios Angelopoulos, assistant professor of chemical and materials engineering, and Jonathan Bernstein, professor of medicine, are partnering with Midwestern firms on

that provide real-time feedback on a variety of health conditions. One of these is an inexpensive, portable breath sensor that has potential as a new non-invasive means to test for diabetes. The research has led to the founding of a start-up firm, A&B Sensor Technologies, which is working with Ohio partners Mound Technical Solutions in Miamisburg, Ohio, and CincyTech in Cincinnati, as well as Flint Hills Resources in Illinois.

Mike Cardarelli and his HERO robot

Former UC student Mike Cardarelli, president, First-Response Robotics in Amelia, Ohio, founded his business on the basis of an applied science senior project completed while he was a student at the university.  Now, the firms robots

to emergency situations like earthquakes or other natural disasters, chemical spills or other hazardous situations or even crime scenes like hostage situations. Clients served by this UC research-based business have included the Environmental Protection Agency and the FBI as well as municipal police forces. For instance, the FBI ordered two of these high-end robots for use in training SWAT teams and for specific use in hostage situations. So, Cardarellis firm custom fit robots for FBI reconnaissance use. One of those FBI robots was even outfitted with a food rack so that it could deliver pizza and drinks to hostages in need of food.

For the EPA, First-Response built a robot equipped with air-sensing devices to help identify the source of any environmental pollutants or contamination. And robots built by the firm were also used to help provide perimeter surveillance at the 2008 Democratic National Convention.

One Bright Idea: Fire Fighting for Less than $1

UC graduate industrial design student and entrepreneur Noel Leon Gauthier is founding his own Ohio company (UMi Design and Development) and has submitted a patent  while also winning investments  for his innovative design called FireStop. FireStop, designed at UC, is a one-button, fire-suppressant device made of inexpensive materials and no moving valves.

It can be manufactured for under $1.

and beyond. Sewage, fertilizer run-off, farm animal waste and plant pulps will be combined with genetically modified bacteria to create direct current electricity and hydrogen gas. This research has already led to a start-up firm, Pilus Energy in Mt. Washington, Ohio.

UC Research by Jason Heikenfeld, associate professor of electrical and computer engineering, has already led to a start-up company, Gamma Dynamics, with the goal of manufacturing  in Ohio  a variety of

that rely on electrofluidic optics for performance: Clear windows that transform into colorful signs, color-changing skins for cell phones, electronic shelf labels for grocery stores, toys and more. The new company has the potential to create

. Partners in this research include Sun Chemical in Cincinnati and FLEX Matters in Kent, Ohio, as well as Motorola in Phoenix, Ariz., and companies in the Netherlands and Taiwan.

from Cincinnati to Cleveland

 to create and employ sensors that provide real-time, pinpoint guidance on bridge safety. These sensors assess the condition of Ohios bridges in order to guide decisions regarding the need for immediate repairs or even replacement. Its work that

saves the state tens of millions of dollars

while improving bridge safety.  In this work UC partners with both state agencies like the Ohio Department of Transportation as well as private firms throughout the state, including Burgess & Niple, Inc.; HNTB Corporation; Michael Baker Jr., Inc.; Parsons Brinckerhoff, TranSystems and URS Corporation.

made by a Miamisburg, Ohio, firm, X-Spine Systems, Inc., that is four years old and growing rapidly.

The Drug Discovery Center is

and one of a few institutes in the nation to provide academic and pharmaceutical expertise to researchers around the world, turning scientific findings into therapeutic technologies that benefit peoples health and wellbeing. The center works in partnership with the Air Force Research Laboratory in Dayton, the Ohio Supercomputer Center in Columbus, Procter & Gamble Co., in Cincinnati, Global Cardiovascular Innovation Center in Cleveland, Case Western Reserve University, Ohio University and Ohio State University.

Joining UC researchers at the event were industry partners, including

WVXU: After decades of efforts, researchers hope they're closer...

It has been more than 40 years since five patients in California developed symptoms of a mysterious disease. The virus that causes AIDS was identified a few years later, and a blood test for HIV became available in 1985. In the 1980s and early 1990s, contracting HIV was practically a death sentence. Nothing seemed to stop the virus from attacking a patient’s immune system and progressing into AIDS. And while there are now treatments that can render the virus undetectable in a patient’s bloodstream, a cure for HIV has been elusive. WVXU's Cincinnati Edition explored the history of AIDS and the latest on treatments, with one of the featured experts being Carl Fichtenbaum, MD, of the Division of Infectious Diseases at the UC College of Medicine.