CINCINNATI – August 6, 2015 – The University of Cincinnati Foundation today announced the conclusion of its most successful Faculty & Staff fundraising campaign ever, with more than 72 percent of University of Cincinnati full-time employees, retirees and former employees giving a combined $13.9 million to the university. Gifts were counted during the 2015 fiscal year (July 1, 2014 through June 30, 2015) and included gifts from current, retired, emeritus and former UC faculty and staff.

Total participation increased 6 percent over last fiscal year and donors increased their total giving by more than $71,000. For the second year in a row, the UC College of Law achieved 100 percent participation; and the Chief Diversity Office, Government Relations and University Communications, Office of the President and UC Foundation also achieved full participation. The UC College of Medicine led the way in total number of donors with 828 faculty and staff members giving back.

“In my career as a higher education fundraising professional, I have never before seen faculty and staff participation numbers at this level,” said UC Foundation President Rodney Grabowski. “Congratulations to the UC family, and thank you for giving back to the university in such a big way.”

UC’s annual Faculty & Staff Campaign, known as “UC the Impact,” is a difference maker for both the university and Greater Cincinnati community. For 11 years, the internal fundraising campaign has been the driving force behind remarkable student success.

“I continue to be impressed by the generosity and compassion of UC’s faculty and staff members,” said UC President Santa Ono. “I am incredibly fortunate to work alongside such dedicated people. Together, we are making UC the #HottestCollegeinAmerica, and I’m looking forward to our bright future.” 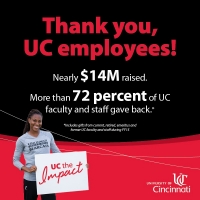