Does UC epidemiologist Diego Cuadros trust his data? You better believe it.

hen Colombia announced it was relaxing its COVID-19 quarantine, Diego Cuadros warned his relieved parents in Bogota not to celebrate just yet.

“They said the quarantine is over on May 1,” the University of Cincinnati epidemiologist recalls. “I told them, ‘Great, but you’re in a high-risk group. You can’t leave home in 2020.’”

His advice was prescient. Coronavirus infections surged in Colombia, extending its quarantine through the summer.

Cuadros is used to telling people what they don’t want to hear. The assistant professor runs the Health Geography and Disease Modeling Lab in UC’s College of Arts and Sciences, where he studies global topics such as HIV and malaria.

He condenses data into easy-to-follow maps that predict the future with uncanny accuracy.

Lately, his Geospatial Health Advising Group at UC has developed projections for COVID-19. And, like his warning to his parents, their predictions have been spot on.

UC found that social distancing cut infections by 40% in Ohio. The group’s analysis projected the spike in cases that urban Ohio saw in the spring. And when Ohio began lifting the statewide quarantine in the face of public and business pressure, Cuadros warned that doing so too quickly would lead to another jump in infections. And by Independence Day, Ohio saw its largest increase in cases in months.

“Almost anything can be illustrated in a map. It’s so very powerful. And people can get engaged in a conversation.”

“Almost anything can be illustrated in a map. It’s so very powerful. And people can get engaged in a conversation.”

“My basic motivation is curiosity, this feeling of excitement that something is new and you don’t understand it,” he says. “And the happiness when you finally do.”

Cuadros grew up in Bogota, where he cultivated a love for nature on family getaways to the mountains. He earned a doctorate in biology under University of Kentucky biologist Philip Crowley.

“He took off like a rocket,” says Crowley, who is spending a sabbatical among the castles and vineyards of Couze-et-Saint-Front, France. “He’s one of those people with the personality and focus and ability to learn things quickly. He’s a good listener. He develops his ideas and blows you away.”

Postdoctoral research took Cuadros to the Middle East, where he worked to identify trends and patterns in public health for the nonprofit Qatar Foundation.

“We were frustrated because the health care system wasn’t owning up to the hepatitis risk,” Miller says. “They wanted to blame it on treatment for a parasitic disease called schistosomiasis from the 1960s. But there was ongoing transmission because they weren’t taking universal precautions.”

Health officials in Egypt pushed back on the findings.

“They didn’t want us to release the data,” Cuadros says. “But in the end, they realized it was more important to take action than suppress information.”

“It’s very frustrating. Maybe we need to do a better job as scientists of explaining what we do and, more importantly, how we do it.”

“It’s very frustrating. Maybe we need to do a better job as scientists of explaining what we do and, more importantly, how we do it.”

Today, the rate of new hepatitis C infections in Egypt has declined significantly.

Likewise, U.S. scientists have faced a backlash over COVID-19. In Ohio, quarantine protesters have demonstrated outside the home of the state’s health director. Day care centers, bridal shops, dance studios and other businesses sued the state over their economic losses.

“Fighting the political wind, it’s really tough,” Miller says. “I admire Diego a lot because he has a lot of guts. He’s not a tenured professor so he’s taking a risk.”

Researchers know their findings have implications outside academia. Cuadros says he is conservative with his conclusions. 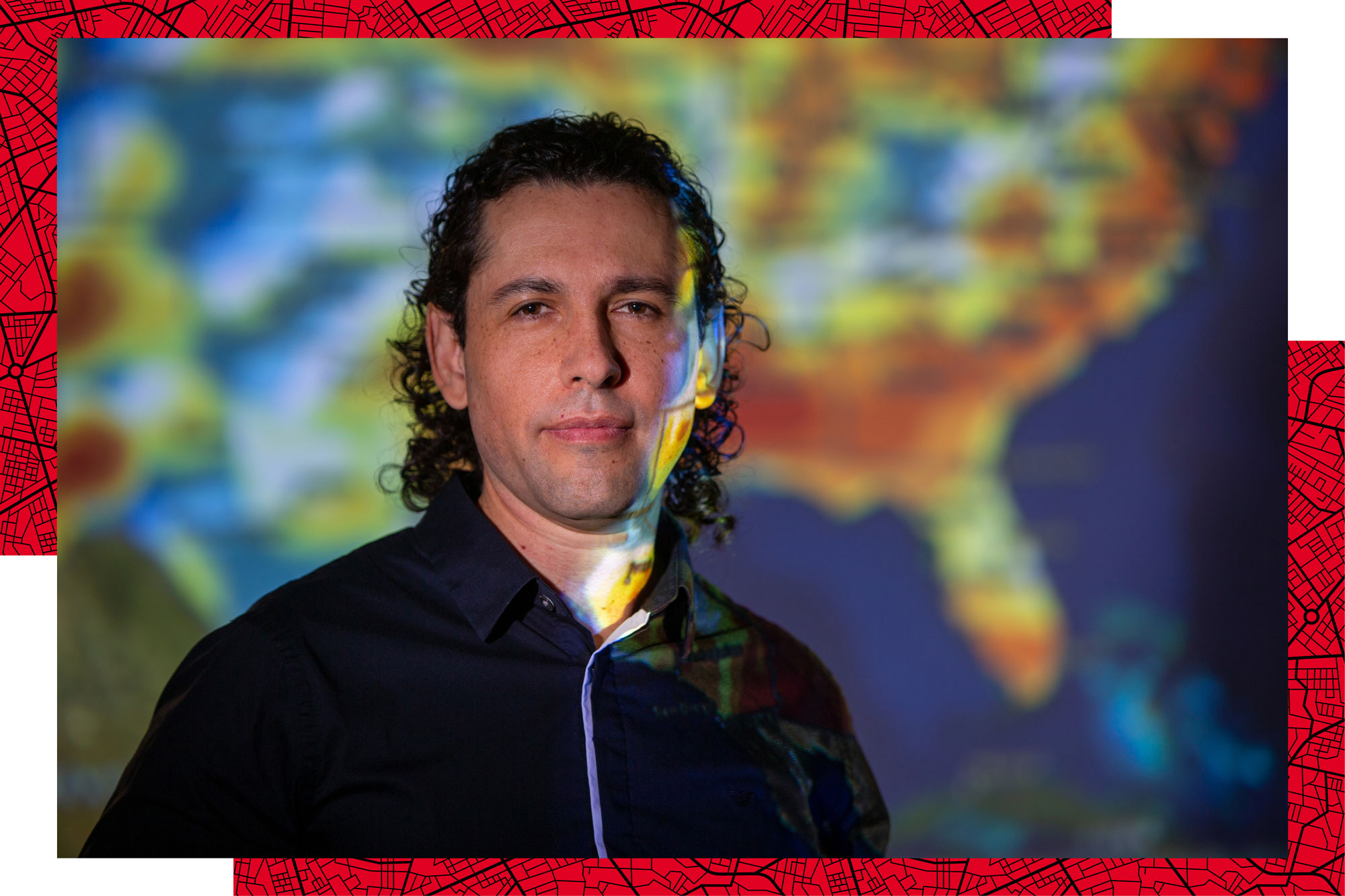 “People want to hear the virus is gone, but that’s not the truth. That’s why you have to be very careful about your projections. This isn’t an opinion, this is what the data says,” he says.

Cuadros refined this approach while studying HIV in South Africa. Few subjects are as awkward to discuss as sexually transmitted diseases, but Cuadros approaches his research with compassion and sensitivity, says Frank Tanser, a professor at the Africa Health Research Institute.

Tanser says researchers must have the fortitude to stand behind their findings in the face of public dissent.

“There’s always that potential. As a researcher you need a thick skin and to let the truth come out,” Tanser says. “When it comes to HIV, South Africa has a checkered history. There was a whole era of denialism where South Africa refused to acknowledge that HIV caused AIDS. That’s the antagonistic relationship sometimes between science and government.”

At UC, Cuadros has helped tackle contentious subjects such as Ohio’s deadly opioid epidemic, which killed 3,237 people in 2018. Research partner Neil MacKinnon, dean of UC’s James L. Winkle College of Pharmacy, says controversy is inevitable when you try to address society’s most pressing problems. MacKinnon saw that firsthand while investigating the causes for medication errors, he says.

“Fighting the political wind, it’s really tough. I admire Diego a lot because he has a lot of guts. He’s not a tenured professor so he’s taking a risk.”

“Fighting the political wind, it’s really tough. I admire Diego a lot because he has a lot of guts. He’s not a tenured professor so he’s taking a risk.”

“When you study something like the opioid crisis, it carries a certain amount of controversy,” MacKinnon says. “We don’t intend to be controversial, but it’s the nature of the work. And we don’t shy away from it.”

More than ever, Cuadros says, he is fighting an anti-science backlash around the global pandemic. Even his family has shared conspiracy theories with him over social media.

“One said COVID-19 isn’t a virus but a bacteria caused by the 5G phone network,” Cuadros says.

“It’s very frustrating. Maybe we need to do a better job as scientists of explaining what we do and, more importantly, how we do it,” he says.

That’s why Cuadros thinks the simple maps he creates to share his research results at UC are such effective tools for communicating science to professionals and the public alike.

“When I give health presentations at conferences, you can show them fancy mathematical models. They get bored. You’ve lost them,” Cuadros says. “Almost anything can be illustrated in a map. It’s so very powerful. And people can get engaged in a conversation.”

Getting people to trust science will be especially important once a vaccine for COVID-19 is found, he says.

“People also are very skeptical about it. Trust will be very important. A majority of people trust in science, but the few who don’t make our work a bit difficult,” he says.

In the meantime, the pandemic is not simply going away. Cuadros empathizes with people who want a return to normalcy.

“I miss going to the gym. Exercise has been a big part of my life since I was a kid when I used to play soccer with my dad,” he says.

He bought a stationary bike and elastic bands to use at home, but it’s not the same. He also misses going out for a beer or dinner with his wife, UC biologist Maria Torres.

“It’s amazing that a little virus can create such a big disturbance in our lives. But we’re really good at adapting,” he says.

Despite reservations, Cuadros remains optimistic and hopeful for the future.

“This is an inflection point,” Cuadros says. “A pandemic of this extent is something that will reshape society, the economy and the course of human history. With the quarantine, we’re learning what is important and meaningful to us.”

Carl Fichtenbaum, a professor in the Division of Infectious Diseases at the University of Cincinnati College of Medicine and one of the leaders in UC’s efforts to combat COVID-19, is still going to protest marches as his passion for social justice, personally and profession- ally, burns as brightly as ever.

University of Cincinnati epidemiologist Diego Cuadros is used to telling people what they don’t want to hear. The assistant professor runs the Health Geography and Disease Modeling Lab in UC’s College of Arts and Sciences, where he studies global topics such as HIV, malaria and, this year, COVID-19. He condenses data into easy-to-follow maps that predict the future with uncanny accuracy.

It’s been said that one should never discuss religion and politics in polite conversation. Similarly, race and gender have long been considered taboo topics best avoided to prevent conflict. That strategy might work at some dinner tables, but for a group of University of Cincinnati women, tackling tough conversations, challenging perspectives and being vulnerable are the keys to growth and understanding.

When did the COVID-19 pandemic first make an impact on your life? March 10? That was the day the University of Cincinnati decided to change something it has excelled at for 200 years. Teaching. Educating. That day UC announced that all lectures in classrooms, experiments in labs or designing in studios would be suspended. Students started what was expected to be just an extended spring break, but then 12 days later all courses had gone virtual to protect the university community and stop the virus’s spread.

Personal growth and perspective in a pandemic

From the President's desk

Mentions of UC in the news and on social media

Tumultuous times for UC and the world, 50 years apart