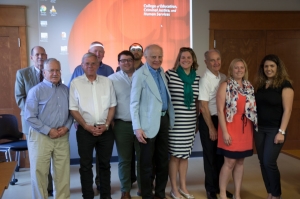 The Fellows of the Graduate School are co-sponsoring the visit of distinguished speaker Aaron Chiechanover, MD, DSc. Dr. Ciechanover, a distinguished research professor in the Department of Biochemistry and a faculty of medicine at Technion-Israel Institute of Technology, was awarded the Nobel Prize for Chemistry in 2004.

The nobel laureate will present the Rachford Lecture for Cincinnati Children’s Research Foundation on Wednesday, August 24, 1–2 p.m. in Research Auditorium ~ R.3381. The title of his lecture is “The Ubiquitin Proteasome System and Intracellular Proteolysis: From Basic Mechanisms thru Human Diseases and on to Drug Targeting.”

To view this document, you will need Adobe Acrobat Reader, a free download.

The Fellows of the Graduate School, with the support of the Graduate School, are happy to announce that they have selected their first group of Graduate Student Fellows for funding. This new program, called Fellowship for Doctoral Students Aspiring to Academic Careers, aims to provide talented doctoral students funding and mentorship through small-group interactions with senior faculty from diverse disciplines so as to fully integrate them into the academic environment and, by exposing them to the benefits, opportunities and challenges of an academic career, to prepare and energize awardees for securing tenure-track positions. Six PhD students were selected from among 21 applications from six colleges for funding. Winners include three students from three departments in McMicken College of Arts and Sciences, two students from the College of Medicine and one student from Cincinnati Conservatory of Music. The first Graduate Student Fellows are:

Each Fellow will be awarded $2,000 per year with the opportunity for renewed funding for up to four years until defense of their doctoral dissertation. Soon these students will be tasked with selecting their mentorship teams from both within and outside their disciplines. Congratulations to each winner!

Geoffrey Parker is a prolific and internationally renowned historian of the social, political, and military history of Early Modern Europe. His widely read work includes studies of the Thirty Years’ War, a definitive biography of King Philip II, and recently, his “big history,” Global Crisis: War, Climate Change, and Catastrophe in the Seventeenth Century (Yale 2013),  speaks broadly to academic and public readers on a topic of current concern, placing him at the forefront of scholars putting developments in Europe into a global context. Hailed by the British Academy as “a landmark achievement… which has transformed understanding” in its field, the book treats the “Little Ice Age,” a climatically-induced crisis that created acute political, economic, intellectual and social upheaval around the globe, causing the premature death of around one-third of the human population. His most recent monograph, Imprudent King: A New Life of Philip II (Yale 2014), is based on four decades of research and a trove of 3,000 documents – unread since Philip’s day – Parker discovered in the Hispanic Society of America in New York City. Parker’s book offers new insights on the most powerful European monarch of his time.

“When Knowledge Meets Power: French Anthropologists in the Age of Total War”

Alice Conklin is the author of two prize-winning volumes on the French Empire. Her first book, A Mission to Civilize: The Republican Idea of Empire in France and West Africa, 1895-1930 (Stanford 1997), examines how racist and republican elements of the liberal Third Republic legitimated imperialism through the notion of a special "mission to civilize,” and examines how this worked on the ground in West Africa. Her most recent book, In the Museum of Man: Race, Anthropology and Empire in France, 1850-1950 (Cornell 2013), won the 2014 David H. Pinkney Prize for best book in French history from the Society for French Historical Studies. Conklin’s study demonstrates how entangled scientific notions of race and culture were, and investigates the role that two generations of professionalizing anthropologists – and their museums – played in enabling modern racism and anti-racism. The work offers new insight into the thorny relationship between science, society, and empire at the high water mark of French imperialism and European fascism. Her lecture at UC draws on her recent work on race and anthropology, as well as research for her new book project on post-WWII anti-racism, particularly in British and French Africa.

Below, please find the slides I presented to the attendees of our Fall Dinner. Thanks to those who attended, and thanks so much to President Ono for updating us about the state of UC and issues related to graduate research and education. Our discussions were very enlightening.

See you at the Winter Fellows Dinner!  And don’t forget to attend the lecture by Louis Langree from the Cincinnati Symphony Orchestra on November 24th at 4 p.m. in the Robert J. Werner Recital Hall of the College-Conservatory of Music.

The Graduate Fellows co-sponsored Dr. David Baltimore, Nobel Laureate, as our Distinguished Speaker on Wednesday, May 6th, 2015 from 4 p.m. to 5 p.m. in Kresge Auditorium in the College of Medicine. The title of his lecture was “Genes and Medicine.” Immediately following the lecture, there was a reception outside the auditorium. President Ono gave Dr. Baltimore the Presidential Award of Excellence at the event. This lecture was part of Research Week 2015.

Dr. Jeff Whitsett, CCHMC, was honored in March 2015 by giving the Life of the Mind lecture, titled “The Impact of the Acceleration of Transforming Technologies  in Medicine and the Biological Sciences." Dr. Ono served as moderator for the event. Melissa Norris, Director of Library Communications, has posted the video to http://www.libraries.uc.edu/lifeofthemind.html.

President Ono was honored in April. He was inducted into Johns Hopkins University’s Society of Scholars for his career of marked distinction. Congratulations, Santa!!

A number of our Fellows were honored as part of the Faculty Awards Ceremony in April:

Ten of our 14 newly-elected Fellows received medals from President Ono. They include:

Samuel Huang, Jay Lee, Heidi Maibom and Robert Skipper could not attend the ceremony.  We honored all of them at the Spring Dinner on April 29th…. Congratulations!