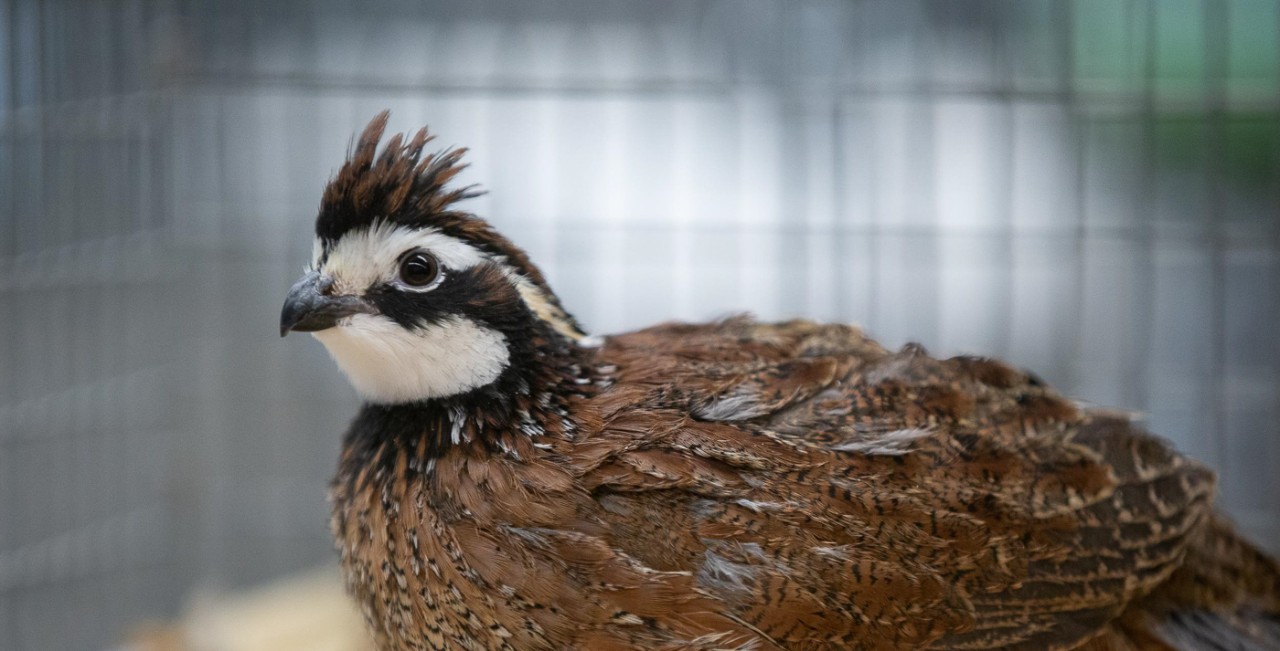 A University of Cincinnati biologist is using tech more commonly found in Amazon distribution warehouses to care for birds in her lab.

UC Assistant Professor Elizabeth Hobson and her students are studying northern bobwhite. The researchers call these fluffy, chestnut-colored quail “the bobs” — and they’re objectively adorable, clucking and calling to each other across the lab.

Hobson and her students must tend to each of the 47 birds daily, topping off food, replacing water and checking on their health and well-being.

“It can be stressful for students to be responsible for animals in a lab — keeping them happy and making sure you’re providing consistent care,” Hobson said.

Hobson needed a simple way to ensure each animal receives proper care. Traditionally, lab workers might keep track of their tasks using a checklist on a clipboard. But logging information every day into a spreadsheet can be tedious and time-consuming.

“With all the care we do every day, I didn’t want to tax my team with a lot of extra bookkeeping or paperwork,” Hobson said.

She turned to a QR scanner, a plastic handheld device that reads laminated QR-code labels affixed to each bird’s cage, ticking off health, food, water and behavioral enrichment that wirelessly transmits data to a spreadsheet.

Outstanding tasks are highlighted in a different color, making it easy for the lab team to verify that all birds have received daily care.

“Once a week, we clean the cages. Twice a week we do enrichment,” Hobson said. “They all happen on different schedules. With different students taking care of the birds, the scanning system has been extremely helpful to keep track of everything.

“Our system makes it fast and easy to collect detailed data on care for each cage. And doing the scanning is actually kind of fun.

Hobson said she drew inspiration from the QR codes biology labs use to track samples or complete surveys. But the codes are used in lots of ways.

Hobson shared her novel animal-care system in the journal Animal Behavior and Cognition.

Hobson and her students are studying the quail’s social behavior and communication.

Doctoral candidate Sanjay Prasher is looking at how groups of quail build their social systems. Prasher put birds in a flight pen together for the first time and recorded social interactions as the quail got to know each other.

“I had the birds in the flight pen for three weeks, each separated by a break, to see whether relationships remain stable over time, even when they haven’t interacted in a while,” Prasher said. “Can they still recognize each other? Can they remember specific relationships?”

Prasher said his preliminary results suggest they do.

“Certain birds seem to hang around each other and the same birds usually fight with each other,” he said.

Bobwhites are found from Nebraska to Florida and Texas to Ohio. In the non-breeding season, they often gather in social flocks called coveys. The social relationships they form in these coveys could be important for finding food and avoiding predators. However, studying the social behavior of quail in the wild over time is challenging because they are prey for everything from cats and foxes to hawks and owls.

“Everybody eats them. They’re like popcorn out there, which makes it hard to get enough data to understand longer-term relationship formation of birds in the wild,” Hobson said.

“In the lab we have controlled conditions where we can take out the predation that would be so disruptive to this kind of long-term social study in the wild,” she said. “Eventually we’d like to connect what we learn in the lab to what they would do in the wild.”

For her senior capstone project, UC College of Arts and Sciences undergraduate student Sophia Clemen is studying the bobwhite’s vocalizations, including its eponymous, musical “bob-white” call.

She and Hobson created tiny soundproof studios for the birds to record their calls. These calls can then be analyzed as spectrographs, which represent the frequency and duration of the calls.

“We’re hoping to get good recordings and then determine whether the bobs have unique, identifiable calls. That could have big conservation implications because it’s difficult for biologists in the field to tell if one or more birds are calling. This makes it hard to estimate things like population size and composition, and the ranges of the quail,” Clemen said.

Bobwhite numbers have declined sharply across most of their historic range. In Ohio, populations 50 years ago numbered in the millions, but several population crashes since then have severely impacted their numbers. Just since 2011, the population has plummeted 71% and now there are fewer than 3,000 wild birds living in the state.

“The initial crash seems to be tied to a couple really bad winters in the 1970s,” Hobson said. “But at the same time, they were getting hit with habitat loss. That combination has made it hard for them to recover. We’re at the very early stages of this new vocalization project, but we’re hoping that we can use our results to better study wild bobwhite populations.”

“Everyone loves the bobs. They’re round and puffy with big, black eyes and they make super cute little chirps and calls. They definitely have their own personality quirks -- some of the quail are much bolder and more inquisitive towards us than others,” Clemen said. “I really enjoy working with them.”

Hobson invites undergraduate students who would like to work with the quail and get research experience in Hobson Lab to apply here.