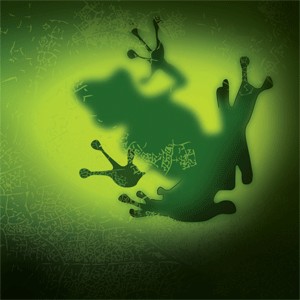 For decades, farmers have been trying to find ways to get more energy out of the sun.

In natural photosynthesis, plants take in solar energy and carbon dioxide and then convert it to oxygen and sugars. The oxygen is released to the air and the sugars are dispersed throughout the plant  like that sweet corn we look for in the summer. Unfortunately, the allocation of light energy into products we use is not as efficient as we would like. Now engineering researchers at the University of Cincinnati are doing something about that.

The researchers are finding ways to take energy from the sun and carbon from the air to create new forms of biofuels, thanks to a semi-tropical frog species. Their results have just been published online in 

Artificial Photosynthesis in Ranaspumin-2 Based Foam

Research Assistant Professor David Wendell, student Jacob Todd and College of Engineering and Applied Science Dean Carlo Montemagno co-authored the paper, based on research in Montemagnos lab in the Department of Biomedical Engineering. Their work focused on making a new artificial photosynthetic material which uses plant, bacterial, frog and fungal enzymes, trapped within a foam housing, to produce sugars from sunlight and carbon dioxide.

Foam was chosen because it can effectively concentrate the reactants but allow very good light and air penetration. The design was based on the foam nests of a semi-tropical frog called the Tungara frog, which creates very long-lived foams for its developing tadpoles.

The advantage for our system compared to plants and algae is that all of the captured solar energy is converted to sugars, whereas these organisms must divert a great deal of energy to other functions to maintain life and reproduce, says Wendell. Our foam also uses no soil, so food production would not be interrupted, and it can be used in highly enriched carbon dioxide environments, like the exhaust from coal-burning power plants, unlike many natural photosynthetic systems.

He adds, In natural plant systems, too much carbon dioxide shuts down photosynthesis, but ours does not have this limitation due to the bacterial-based photo-capture strategy.

There are many benefits to being able to create a plant-like foam.

You can convert the sugars into many different things, including ethanol and other biofuels, Wendell explains. And it removes carbon dioxide from the air, but maintains current arable land for food production.

This new technology establishes an economical way of harnessing the physiology of living systems by creating a new generation of functional materials that intrinsically incorporates life processes into its structure, says Dean Montemagno. Specifically in this work it presents a new pathway of harvesting solar energy to produce either oil or food with efficiencies that exceed other biosolar production methodologies. More broadly it establishes a mechanism for incorporating the functionality found in living systems into systems that we engineer and build.

The next step for the team will be to try to make the technology feasible for large-scale applications like carbon capture at coal-burning power plants.

This involves developing a strategy to extract both the lipid shell of the algae (used for biodiesel) and the cytoplasmic contents (the guts), and reusing these proteins in the foam, says Wendell. We are also looking into other short carbon molecules we can make by altering the enzyme cocktail in the foam.

Montemagno adds, It is a significant step in delivering the promise of nanotechnology.

Other Recent News About the College of Engineering and Applied Science

University of Cincinnati College of Engineering and Applied Science offers the first Energy and Materials Engineering undergraduate degree program in the United States.