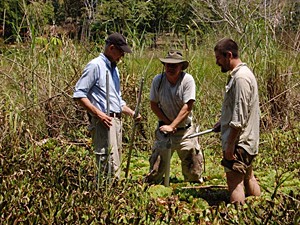 UC Research Explores Why Ancient Civilization Was Livin on the Edge

University of Cincinnati research is investigating why a highly sophisticated civilization decided to build large, bustling cities next to what is essentially swampland. The research by UC Geography Professor Nicholas Dunning, a three-year, interdisciplinary project including David Lentz, professor of biological sciences, and Vern Scarborough, professor of anthropology, will be presented April 1 at the annual meeting of the Society for American Archaeology in Sacramento, Calif. This annual meeting draws more than 3,000 researchers from around the world to present research covering a wide range of topics and time periods.

Dunnings research zeroes in on why larger and successful Maya communities were located along the edges of the massive wetlands of Tikal.

Supported by the National Science Foundation and the Wenner Gren Foundation, the UC researchers are exploring different aspects of the ancient Maya in one of the premier cities of the ancient Maya world, Tikal, located in northern Guatemala. Its a region where architecture  pyramids, palaces and temples dating as far back as the fourth century B.C. are still standing in tribute to this ancient, sophisticated, Native American society that largely disintegrated around 900 A.D. Their demise has remained a mystery for centuries.

Located near the southwestern margin of the Bajo de Sante Fe, its also a challenging region to conduct research. It doesnt take a lot of rain to make it impossible to get in and out of the bajos. Theyre seasonal swamps. The mud gets deep very quickly, explains Dunning.

But the researchers have found that when the Maya started building their cities adjacent to these wetlands, they were different environments than what exist now, Dunning says. Portions of the area where UC researchers are working once may have been a shallow lake and perennial wetlands from which early populations extracted organic, peat moss-like soil to help sustain nearby fields where the Maya were primarily farming maize. Over the years, the farming-on-the-edge practice on sloping land led to soil erosion that resulted in creating aprons of deep, rich soil along the interface between the uplands and the swamps.

We have good evidence from Tikal and other sites in this region that these areas became the focal point where agriculture occurred in the Classic Period, where these anthropogenic soils were created at the base of the slopes, Dunning says.

In regard to the edge farming, the researchers studied the soil and found significant amounts of pollen, which would indicate a significant amount of maize was produced. In addition, the organic matter produced from the corn was reflected in the soils composition.

The UC research was a joint project with Instituto de Antropología e Historía (de Guatemala)  IDEAH  under the Guatemalan government. Lentz and Scarborough will also be presenting findings related to their fields  regarding the Mayas advances in forestry and water management  at the conference.

Dunning has been conducting research related to the geography of Guatemala since 1991. One of the fascinating aspects of archaeology is that in reconstructing entire civilizations, one cant understand how an ancient civilization worked from just one perspective, so it naturally lends itself to interdisciplinary work, he says.