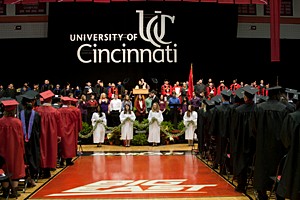 University of Cincinnati To Award More Than 5,630 Degrees

The University of Cincinnati will celebrate All-University Commencement on June 8-9 in three ceremonies, with each ceremony including doctoral, masters, bachelors and associate degree candidates. All ceremonies will be held in Fifth Third Arena and will be led by UC President Gregory H. Williams.

The addition of a third ceremony for undergraduates opens space for UCs larger number of undergraduates earning degrees this spring  growth as a result of recruiting larger classes of freshmen and progress on increasing graduation rates.

is available from the

Parking is free in all West Campus garages on June 8 and on June 9.

UCs Office of Institutional Research reports that 5,521 students applied for graduation, up 14 percent (and up 678 students) from last spring. The graduates are earning:

Out of the total number of degrees, 2,568 are from fields in the science, technology, engineering, math and medical (STEMM) areas. The number of students who took at least one distance-learning course was 3,175. The Class of 2012 includes 220 graduates from Cincinnati Public Schools.

Click here for a statistical look at the Class of 2012

Alan Hagerty, 2011-12 Student Body President, will deliver the university oration for the June 8 ceremony. The Centerville, Ohio, native is graduating through the UC

with a bachelors degree in civil and environmental engineering as well as his MBA from the Carl H. Lindner College of Business.

Sarah Stenger, of Cleves (Cincinnati), will deliver the university oration for the Saturday morning ceremony. Stenger is graduating with a bachelors degree in business administration from the Carl H. Lindner College of Business.

Nick Hunter, of Colerain Township, will deliver the university oration for the Saturday afternoon ceremony. Hunter is graduating with a bachelors degree in communication and a minor in German studies.

Four UC graduates will be recognized with the

Click here for briefs and features on individual graduates.

Nationally, job prospects for the Class of 2012 are looking better than for the previous years graduates. A survey conducted by the

indicates that employers plan to hire 10.2 percent more new college graduates than they did in 2011.

will address graduates at all ceremonies. Clooney will also receive an Honorary Doctor of Humane Letters during the 9 a.m. ceremony on June 9.

The university will also present honorary degrees to:

executive director of the Cincinnati Zoo & Botanical Garden. Maynard will be awarded an Honorary Doctor of Science during the 2 p.m. ceremony, on Saturday, June 9.

founder and president of the Center for Neighborhood Enterprise. Woodson will be awarded an Honorary Doctor of Humane Letters during the 9 a.m. ceremony, on Saturday, June 9.

The University of Cincinnati Award for Excellence will be presented to:

founder and CEO of the national Speaking of Womens Health Foundation and founder of the Clever Crazes for Kids health outreach program, will be honored during the 2 p.m. ceremony, on Saturday, June 9.

senior associate dean for academic affairs at the University of Cincinnati College of Medicine and vice president for medical education for UC Health and associate chief of staff at UC Health University Hospital, will be honored during the 9 a.m. ceremony, on Saturday, June 9.

Each ceremony will be followed by a reception for graduates and guests at the Russell C. Myers Alumni Center, hosted by the UC Alumni Association.

All ceremonies will be webcast by UCs Presentation Technologies & Services Group, marking the 14th year that UCs Commencement can be viewed via the Internet.

The webcasts will begin 30 minutes before each event.

UC Engineering Grads Will Likely Earn About $1 Million More in Their Careers vs. High School Grads

UC researchers have determined what African elephants can hear

University of Cincinnati’s Facility for the Education and Testing of Canine Hearing and Laboratory for Animal Bioacoustics (FETCHLAB) has sent a team of researchers to study on what African bush elephants can hear.