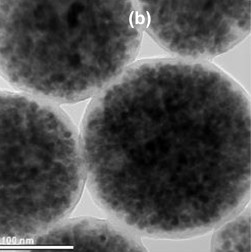 In current research related to improving cancer treatments, one promising area of research is the effort to find ways to selectively pinpoint and target cancer cells while minimizing effects on healthy cells.

So, a University of Cincinnati-led team  along with researchers at Iowa State University, the University of Michigan and Shanghai Jiao Tong University  recently conducted experiments to see which iron-oxide nanoparticle configurations or arrangements might work best as a tool to deliver this killing heat directly to cancer cells, specifically to breast cancer cells. The results will be presented at the March 3-7 American Physical Society Conference in Denver by UC physics doctoral student Md Ehsan Sadat.

the research team found that an unconfined nanoparticle system, which used an electromagnetic field to generate heat, was best able to transfer heat absorbed by cancer cells.

So, from the set of nano systems studied, the researchers found that

 both of which were unconfined or not embedded in a matrix 

heated quickly and to temperatures more than sufficient to kill cancer cells.

The goal was to determine the heating behaviors of different iron-oxide nanoparticles that  varied in terms of the materials used in the nanoparticle apparatus as well as particle size, particle geometry, inter-particle spacing, physical confinement and surrounding environment since these are the key factors that strongly influence whats called the Specific Absorption Rate (SAR), or the measured rate at which the human body can absorb energy (in this case heat) when exposed to an electromagnetic field.

All four nanoparticle systems were exposed to the same magnetic field for 35 minutes, and temperature measurements were performed at two-minute intervals.

Support for this research was provided by a National Science Foundation grant under contract number NSF (1343568) titled Development of Nanotechnology Minor Focused on Nano Biomedicine and Sustainable Energy. Work at the Ames Laboratory was supported by the United States Department of Energy, Basic Energy Sciences, Division of Materials Sciences and Engineering.