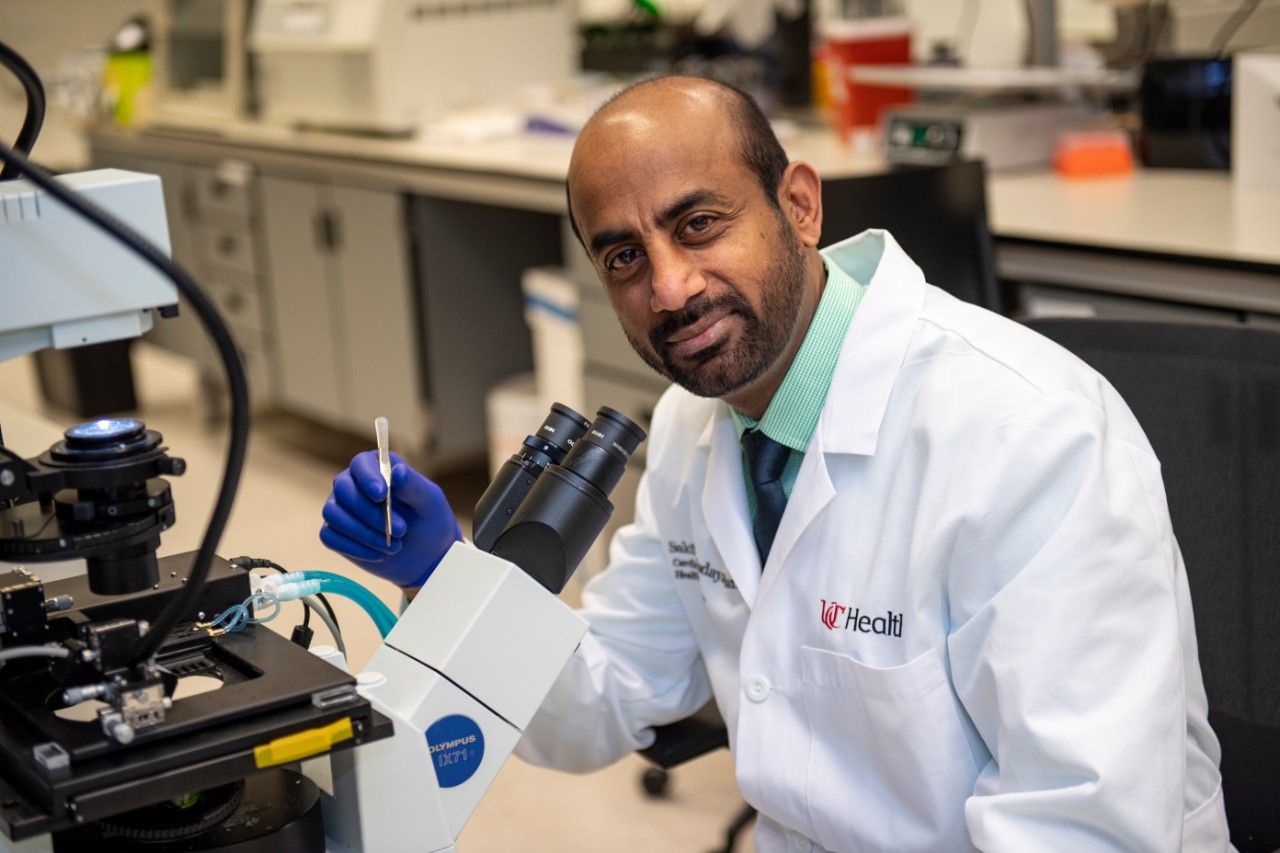 In an effort to save her beloved animals, Kathy Janson, a Maine coon cat enthusiast reached out to a University of Cincinnati researcher to find a way to help her pets who were developing heart troubles.

Maine coon cats are known as great mousers, popular farm cats and, of course, for their enormous size. The New England breed is a really big cat and can weigh up to 19 pounds and grow up to 40 inches in length. Janson fell in love with these animals more than 25 years ago bringing them into her Cincinnati suburban home to become part of her family.

“Maine coon cats are beautiful animals,” she says. “They have great personalities with dog-like characteristics, coming when called. They are intelligent, lovable lap cats. There is no cat like them in my estimation.”

Her cats learned to open cabinets, fetch pens and one of her Maine coon cats she trained to use the toilet. “There was a book out about how to train your cat to do this,” says Janson. “I worked with him and he just took to it. It sounds funny but he was unbelievable.”

Janson became alarmed when one of her pets, Reggie, a blond purebred Maine Coon, was suddenly diagnosed with hypertrophic cardiomyopathy (HCM), commonly known as an enlarged heart, in March 2017. HCM leads to thickening of the muscle walls of the heart causing heart failure or other complications such as blood clots in major blood vessels over time. About 30% of Maine coon cats have a genetic mutation that predisposes them to HCM.

Desperate to save her beloved pet, Jason researched the topic and stumbled upon a research article discussing a drug known as Mavacamten (MYK-461) and a role it might play in addressing feline HCM. Sakthivel Sadayappan, PhD, professor in the UC College of Medicine and shown in the photo above, was listed as editor of the article. Sadly, Reggie died of congestive heart failure in April 2017 at age three. The Jasons owned a 10-year-old cat, Nigel, who was related to Reggie and they worried he might also have the HCM gene mutation.

The family contacted Sadayappan, who along with his postdoctoral fellow, James McNamara, PhD, tested Nigel and found he did not carry the HCM mutation. A few months later they purchased a Maine Coon kitten, Freddie. Initially, Freddie appeared healthy, but soon too developed a heart murmur.

“Mrs. Janson approached me about finding help with the treatment and diagnosis of her cat Freddie,” says Sadayappan, also scientific director of the UC Heart, Lung and Vascular Institute. “So, we began our study of this second Maine coon who is the subject of our latest research on feline hypertrophic cardiomyopathy.”

Sadayappan has studied HCM in humans for the past two decades. His laboratory in the University of Cincinnati College of Medicine has investigated variants of the heart gene cardiac myosin binding protein-C and its role in the development of HCM which affects 1 in 500 humans.

Research from the Sadayappan Lab has shown that the prevalence of a genetic heart variant in people of South Asian descent predisposes them to HCM. But the researchers turned their focus to feline physiology and began studying DNA samples collected from Freddie to determine what genetic mutation might be affecting the animal’s heart health.

Sadayappan and McNamara were able to eventually identify a mutation in a gene known as troponin-T (TNNT2), which regulates heart contractility. It is present in humans, but this is the first time it has been associated with heart disease in cats. Their findings appear in the scholarly journal Frontiers in Physiology.

“We know this gene in humans is associated with sudden cardiac death,” says Sadayappan. “The gene is involved in regulating calcium in the heart which regulates pumping action of the heart. If you know this, you can treat this cat and other carriers of this gene differently when addressing heart disease. You can consider calcium blockers, channel blockers or other types of drugs. This type of diagnosis can be essential in heart treatment.”

A loving pet and a model for more research

McNamara, currently a research fellow at Murdoch Children’s Research Institute in Melbourne, Australia, says the study was exciting for researchers in the Sadayappan Lab.

"It was unique for our lab and a great opportunity to interact with the community. We were approached by Kathy Janson who was very concerned about her Maine coon cat. This gigantic breed of cats are about twice the size of a normal cat. They are more likely to experience hypertrophic cardiomyopathy where the heart grows abnormally large and blood can’t fill it efficiently.”

McNamara said researchers examined a blood sample from Janson’s cat, Freddie, and they were surprised to find the cat didn’t have a more common mutation associated with HCM. They used genetic sequencing as part of their efforts and acquired blood from Freddie’s parents to examine it for genetic variants. Both parents had one mutated copy of troponin-T (TNNT2) and they passed those defective copies to Freddie.

“By the time we figured this out the cat had already been on drugs to stabilize his condition,” says McNamara. “But our work has important implications for the future. It suggests that in these Maine coon cats it is not just one mutation that is important, but we should be potentially looking at other proteins that may cause disease.”

Sadayappan says the work identifying the cause of Freddie’s HCM will serve as an animal model for researchers to use as they search for better treatments for HCM in humans. Freddie continues to play with other cats adopted by Janson. There is 13-year-old Nigel, also a Maine coon cat, who was also tested for HCM but turned up negative, and a black cat named Siggy.

Janson says she thinks the struggles of Freddie and Reggie may advance our understanding of HCM in humans. Freddie is on multiple heart medications but appears healthy. He has an echocardiogram every six months with MedVet cardiologist Maggie Schuckman, DVM.

“In the long run I think my cats might have some role to play in helping find the solution for those young people who die suddenly of heart issues because of hypertrophic cardiomyopathy,” says Janson. “It is a way for research to use my cats to find a solution for cardiac problems in humans.”

“Dr. Sadayappan and Dr. McNamara have been so helpful, kind and so knowledgeable that I feel very much honored that my cats have been in their study,” says Janson. “They have been able to use the information they have found to further their work in the area of hypertrophic cardiomyopathy.”

Other co-authors of this study include veterinary cardiologist Maggie Schuckman, DVM, and Richard Becker, MD, professor in the UC College of Medicine.

Sadayappan provided consulting and collaborative research studies to the Leducq Foundation, Red Saree Inc., Greater Cincinnati Tamil Sangam, MyoKardia, Merck & Co. and Amgen, but such work is unrelated to the content of this manuscript. Becker serves on scientific advisory boards for Janssen and for Basking Biosciences and DSMB Committees for Ionis Pharmaceuticals, Akcea Therapeutics and Novartis.