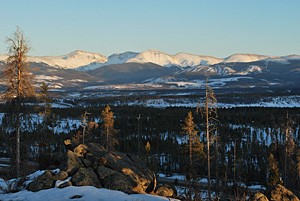 How can communities dodge future disasters from Mother Nature before she has dealt the blow? Researchers are taking a unique approach to the issue and gaining input and support from community stakeholders. Daniel Murphy, a University of Cincinnati assistant professor of anthropology, will present findings on March 20, at the 74th annual meeting of the Society for Applied Anthropology (SFAA) in Albuquerque, N.M.

The researchers conducted a series of one-on-one interviews at those sites to get an array of community contributors thinking and planning for future ecological hazards, and to consider the impact of those decisions.

The researchers posed three scenarios involving future drastic climate changes. The one-on-one interviews involved around 30 people for each region, ranging from ranchers to teachers, small business owners, hunting guides, county planners and representatives from federal and state agencies. Ecologists on the research team would then predict the impact of the suggested planning.

The three possible scenarios were:

 Describes changes in seasonality, such as significantly increased rainfall in the spring.

 Describes big swings in temperature and precipitation between years.

Areas like the Big Hole depend on snow to irrigate their hayfields, explains Murphy, so little snowfall could pose a big problem. Not only does it affect their hay crop, but in a region with the Arctic Grayling, a candidate for endangered listing, the water shortage would affect wildlife. Because of these scenarios, more groups were open to conservation efforts. All community interests were able to see the benefits of conservation efforts.

Flood irrigation, for example, has environmental impacts that are really, really good. So, we looked at the impact of stopping flood irrigation and switching to center pivot irrigation. It could rob the groundwater, it would evaporate off the soil and it wouldnt go back into the river, so river levels would go down and stress the fish. So in examining that scenario, ranchers could see how this feeds back and thats the iteration, says Murphy.

Murphy adds that one of the major concerns in Grand County, Colo., is also water, because much of the snow melt there feeds into a lake thats a reservoir for Denvers water. Ranchers, irrigators and home owners are concerned about rising water prices if there is less snow, so that was a conflict that seemed to emerge there.

Murphy says that in both Grand County and Big Hole Valley, the second scenario was perceived as an opportunity, because despite any temperature increases or other issues, it involved continuous rain in the spring.

Murphy is now exploring climate vulnerability in Ohios Appalachia near the Wayne National Forest in southeast Ohio, where he says future flooding could pose a threat.

A lot of research in this area tends to focus on past vulnerability or past adaptation, and from my perspective, thats come and gone. The real opportunities lie in the future, and were examining how city planners, urban planners and extension agents can utilize our research in future decision-making, says Murphy.

Funding for the project was supported by the U.S. Forest Service at the Rocky Mountain Research Station. The interdisciplinary project involved the expertise of anthropologists, conservation social scientists, ecologists and a hydrologist.

The SFAA promotes interdisciplinary research in addressing issues affecting human beings around the world. The destinations theme of the spring conference focuses on transience and mobility.

is involved in active field research stretching from Madagascar to Mongolia. Its emphasis on research and teaching covers bioevolutionary approaches to health, ecosystem dynamics and forms of social inequality.