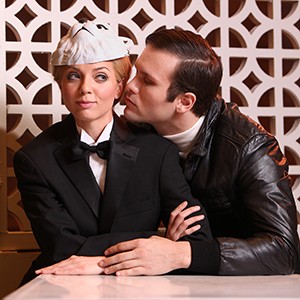 The University of Cincinnati College-Conservatory of Music (CCM) concludes its 201415 Mainstage Series with a true powerhouse: Wolfgang Amadeus Mozarts

returns to the Patricia Corbett Theater stage at

directs. This production will be sung in Italian with English supertitles.

Guarino is certainly no stranger to

, as she has successfully directed the opera multiple times for the world-renowned

(the Met) in New York City. Notably, her September 2013 engagement with

also marked the return of beloved conductor James Levine to the Mets podium for the first time since May 2011. A Cincinnati native, Levine is a former pupil of LaSalle Quartet violinist and CCM Professor Emeritus Walter Levin. In his review for the

as the most vibrant, masterly and natural performance of the work he had ever heard. Tommasini especially lauded Guarinos direction, calling it effortlessly in sync with Levines conducting.

Mozarts opera, with a libretto by Lorenzo Da Ponte, follows the well-worn tread of light Classical Era opera. Officers Ferrando and Guglielmo are certain that their fiancées Dorabella and Fiordiligi (respectively) will always be true to them a belief not shared by Don Alfonso, who, in his certainty that women can never be faithful and trustworthy, makes a wager with the two that he can prove within one day that their fiancées are fickle. To this end, he concocts a scheme with the soldiers: they will pretend to be called off to war, return disguised as Albanians and they will each attempt to woo the others fiancée.

Confusion, cross-dressing and romantic banter abound as the scheme unfolds, testing Dorabella and Fiordiligis resolve as well as Ferrando and Guglielmos skills in deception. With enjoyable music and a lighthearted plot transported to mid-20th century America,

is the perfect way to welcome spring and say a fond farewell to CCMs Mainstage Season!

Tickets to CCMs Mainstage production of

Tickets can be purchased in person at the CCM Box Office, over the telephone at 513-556-4183 or online at

Parking is available in the CCM Garage (located at the base of Corry Boulevard off Jefferson Avenue) and additional garages throughout the UC campus. Please visit

for more information on parking rates.

. Additional parking is available off-campus at the new U Square complex on Calhoun Street and other neighboring lots.

For directions to CCM Village, visit