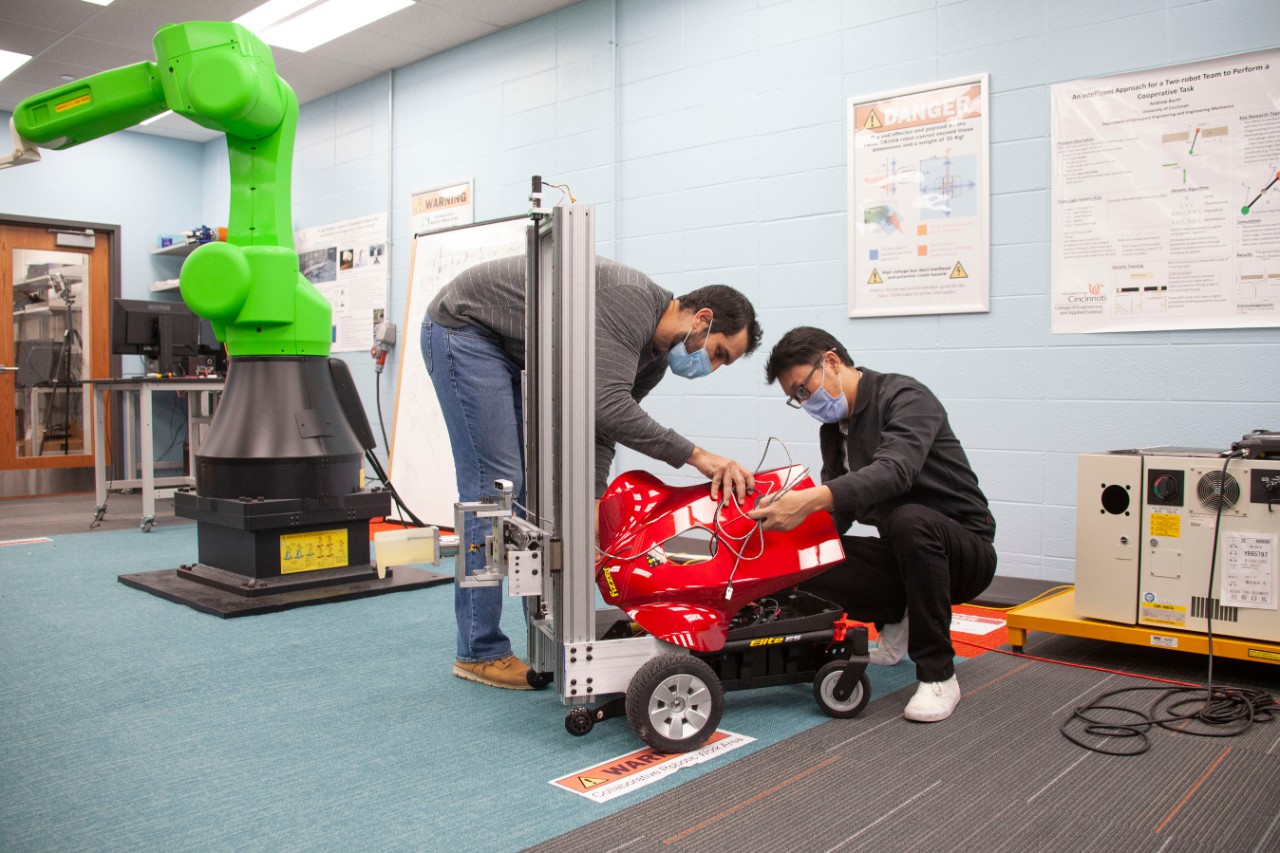 And doors are kryptonite to robots, said Ou Ma, an aerospace engineering professor at the University of Cincinnati.

“Robots can do many things, but if you want one to open a door by itself and go through the doorway, that’s a tremendous challenge,” Ma said.

Students in UC’s Intelligent Robotics and Autonomous Systems Laboratory have solved this complex problem in three-dimensional digital simulations. Now they’re building an autonomous robot that not only can open its own doors but also can find the nearest electric wall outlet to recharge without human assistance.

This simple advance in independence represents a huge leap forward for helper robots that vacuum and disinfect office buildings, airports and hospitals. Helper robots are part of a $27 billion robotics industry, which includes manufacturing and automation.

The UC study was published in the journal IEEE Access.

“Since robots can’t open doors, someone has to open doors for the robot to do its work,” Ma said. “Robots are supposed to help people, but people also must help robots for routine things like opening doors or recharging.”

UC College of Engineering and Applied Science doctoral student Yufeng Sun, the study’s lead author, said some researchers have addressed the problem by scanning an entire room to create a 3D digital model so the robot can locate a door. But that is a time-consuming custom solution that works only for the particular room that is scanned.

Sun said developing an autonomous robot to open a door for itself poses several challenges.

Doors come in different colors and sizes with different handles that might be slightly higher or lower. Robots have to know how much force to use to open doors to overcome resistance. Most public doors are self-closing, which means if the robot loses its grip, it has to start over.

“You don’t really think about it, but you can’t let the door go or it will close. So you have to hold it open and swivel around it,” Ma said.

Some engineers have mounted an arm with multiple joints on robots to grasp a knob or door handle, but these can be extremely expensive. A single robot arm with six joints, or degrees of freedom, that mimic the full range of motion of a human arm can cost tens of thousands of dollars, Ma said.

UC students solved the problem by designing an appendage on a simple motorized lift the robot can raise and lower to reach a door handle. A small arm at the base holds the door open while the robot pivots around it and carries on with its duties in the next room.

“It’s a very simple motion. And it’s much cheaper than a six-degrees-of-freedom robotic arm,” Ma said.

Since UC students are using machine learning, the robot has to “teach” itself how to open a door, essentially through trial and error. This can be time-consuming initially, but the robot corrects its mistakes as it goes. Simulations help the robot prepare for the actual task, Sun said.

“The robot needs sufficient data or ‘experiences’ to help train it,” Sun said. “This is a big challenge for other robotic applications using AI-based approaches for accomplishing real-world tasks.”

“The challenge is how to transfer this learned control policy from simulation to reality, often referred to as a ‘Sim2Real’ problem,” Sun said.

King said service robots have taken off, particularly during the COVID-19 pandemic when tedious tasks such as disinfecting rooms with mists or ultraviolet light could be automated.

“This takes autonomous robots to a whole new level of independence,” King said.

Similarly, a robot that can recharge using the nearest convenient electric wall outlet would be extremely helpful, Ma said.

So the robot UC students are building in the lab will be able to identify a wall outlet and insert the plug without human help.

Like opening a door, that’s easier said than done for a robot.

“It’s a combination of challenges. An electric socket is very small, so the robot has to identify it first,” Ma said. “And humans have the dexterity to find the socket and plug it in quickly. But asking a robot to do that is not as easy. If the robot doesn’t align perfectly, it will fail.”

But Ma said their algorithm gives the robot more flexibility to “feel” around for the plug when it gets close.

“It’s especially difficult for a robot to do that,” Sun said.

Digital simulations typically are only 60% to 70% successful in initial real-world applications, Sun said. He expects to spend a year or more bridging the gap to perfect his new autonomous robotics system.

UC students Sam King and Yufeng Sun are building an autonomous robot that will be able to open its own doors and find its own electric outlets to recharge. Photo/Ravenna Rutledge/UC Creative + Brand

Submit your application by Nov. 14 at no cost.