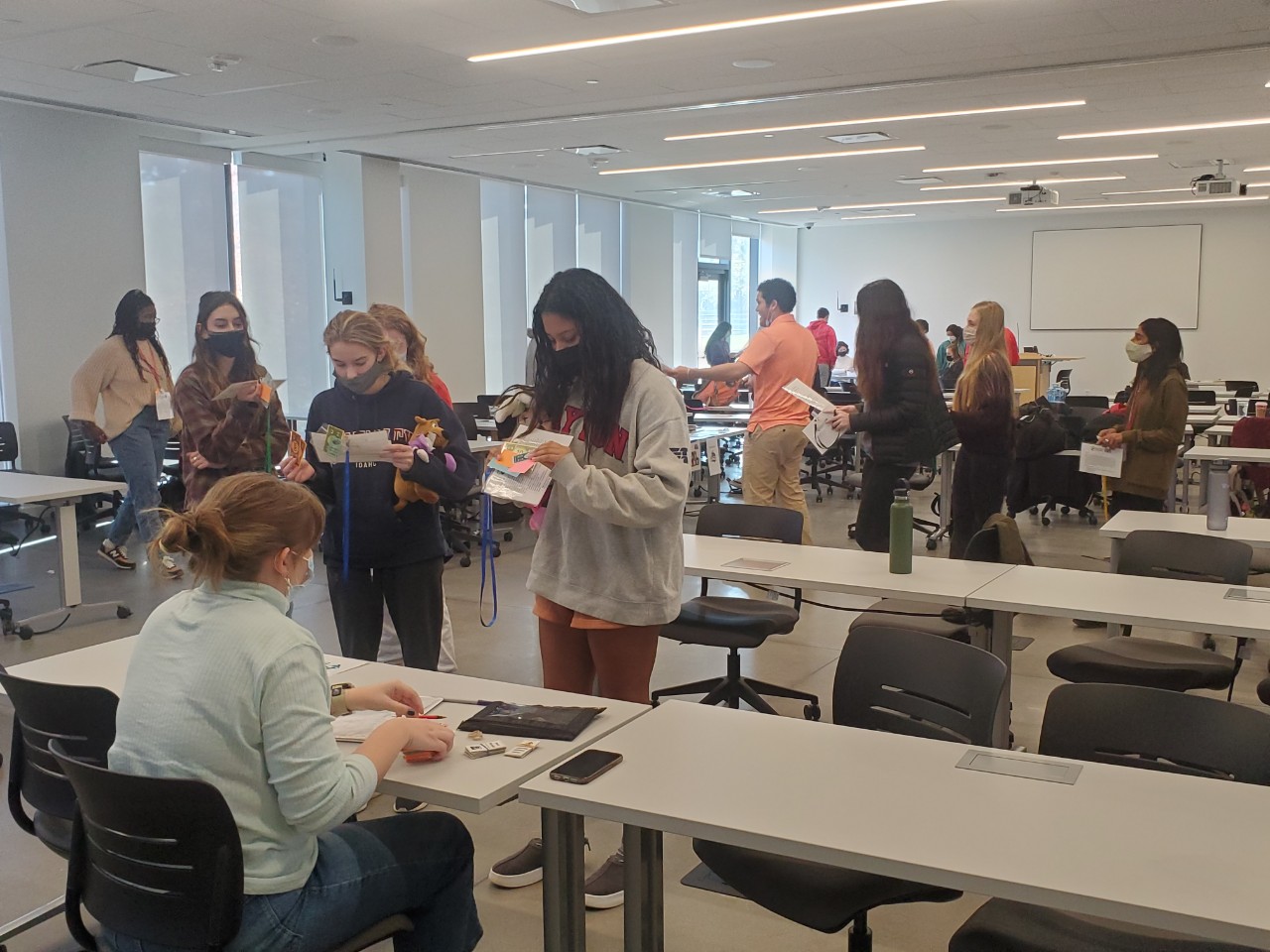 ECON 1001 class participates in a simulation created by the Society of St. Vincent de Paul

First-year Lindner Business Honors students in ECON 1001 recently participated in a "poverty simulation," an immersive experience designed to foster awareness and educate the participants about the harsh realities experienced by someone living in poverty.

“The goal of the simulation is to demonstrate the complexities of the experience of poverty, and to develop compassion and non-judgment from the participants,” said Mo Kelly, service learning program manager, Society of St. Vincent de Paul. “Oftentimes, from middle class or higher, it is easy to say, ‘They wouldn’t be in poverty if they just did XYZ.’ But going through this simulation shows that it isn’t as simple as finding a job or paying off your bills. Poverty is a web of unstable resources and unpredictable circumstances.”

Each participant received a persona based on a real situation of an impoverished person in Cincinnati, with names and details changed to protect anonymity. They had one hour — the equivalent of one month — to assess the resources in the space to accomplish their responsibilities by the end of the "month." Volunteers acted as agencies, such as child care, a bank, a pharmacy, a college or university, a grocery store, and a probation or parole office.

The goal of the simulation is to demonstrate the complexities of the experience of poverty, and to develop compassion and non-judgment from the participants.

According to Jones, students discovered how strategies to address poverty may lead to unintended consequences for the individuals being helped.

“The need to travel to many places to access help caused them to miss medical appointments, school and even work,” he said. “The students learned the complexity of poverty and discussed ways to help those in need.”

Sydney Rohrs, a finance major, noted the exercise taught the group about the overlooked difficulties caused by living in poverty.

“For example, getting a job is not that simple. We had to travel there and had other barriers, such as a prison record, that further prevented us,” Rohrs said.

Paige Pennington, an accounting major, had a similar experience with her assigned persona.

“The poverty simulation illuminated the difficulties that the financially challenged face on a daily basis. For example, my character was kicked out of Cincinnati State due to a missed class, which resulted from transportation difficulties,” Pennington said. “Throughout this activity, I learned about the various organizations available to assist those living in poverty, and St. Vincent de Paul concluded the simulation with a powerful presentation reflecting on our experience.”

At minimum, Lindner's next generation of problem solvers received a small dose of the frequent hardships and obstacles generated by living in poverty.

For 115 years, our students and graduates have achieved great success in business and service, our academic programs have earned national acclaim, and our faculty and subject matter experts have sparked innovation and insights through cutting-edge research. What's next starts now. Learn more.

Partnerships between businesses and colleges offer access to talent-driven students who can help them use data to fuel business success.

Corporate partner at the 1819 Innovation Hub, Fifth Third Bank, recognizes that employees are at the heart of the digital revolution. It takes more than just assembling a star-studded dream squad to succeed in business. It involves upskilling, training and transforming current personnel into superstars.