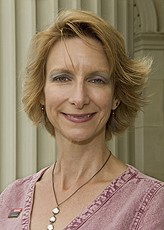 In naming Hardcastle to the deanship of UCs largest college, Senior Vice President and Provost Anthony J. Perzigian said, "An effective leader of the McMicken College of Arts and Sciences must combine a breadth and depth of scholarly achievement with a solid record of academic administrative experience, a proven ability to champion the liberal arts, and a keen vision for preparing UC students for the challenges of the 21st century. Dr. Hardcastle meets, and by several orders of magnitude, exceeds those criteria. Her impressive scholarly credentials, her entrepreneurial flair, her keen grasp of the challenges and opportunities facing urban research universities and her commitment to public service portend well for A&S and UC."

Perzigian continued, "I am supremely confident that we have recruited an outstanding leader who will be assuming one of UCs most important and influential leadership positions."

The appointment is contingent upon approval by the UC Board of Trustees. Hardcastle is expected to officially begin her tenure at UC on September 4, 2007.

She is no stranger to UC, having previously served as a Taft Fellow in the Department of Philosophy from 1998 to 1999.

In accepting the UC appointment, Hardcastle said, I am truly honored to have been selected for this position. UCs vibrant optimism is wonderfully contagious, and I look forward to partnering with the UC community in stewarding McMicken College toward achieving unparalleled excellence in the 21st century.

Currently targeting the areas of philosophy of mind and cognitive science, Hardcastles research has been focused on understanding the nature and structure of interdisciplinary theories in cognitive science, and developing a philosophical framework for understanding conscious phenomena responsive to neuroscientific and psychological data. Aside from the more traditional issues in philosophy of mind, and related concerns in epistemology and metaphysics, she is also interested in how (and whether) psychological phenomena (such as consciousness, memory and perception) relate to underlying neurophysiology, what these relations tell us about the mind, ourselves as cognitive creatures, and the possibility of a cognitive science.

Hardcastle earned her PhD in cognitive science and philosophy from the University of California, San Diego in 1994.

About the McMicken College of Arts and Sciences