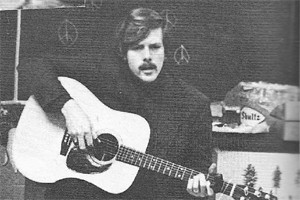 April 1970: students in many walks of life were pursuing their passions at colleges across the United States. George Uetz, professor of biological sciences in the McMicken College of Arts & Sciences, was a Master's student in the Department of Entomology and Applied Ecology at the University of Delaware in Newark. But that wasnt his only passion.

I was a student activist in the anti-war movement as well as the environmental movement of the time, Uetz admits.

I got involved with one of the leading East Coast groups  Environmental Action, based in Washington, D.C.,  and was recruited to organize students because I was an officer of the grad student association at the University of Delaware, he says. We started planning "teach-ins" and large rallies in cities all over the East in the fall and winter of 19691970.

While Uetz was a only a minor functionary at the national level (as the chairman of the Earth Coalition at Delaware), he did get to go to organizing meetings in nearby Washington, D.C. There he met such people as Senator Gaylord Nelson (D-Wisc.), Denis Hayes, David Brower (first executive director of the Sierra Club), Carl Pope (current executive director of the Sierra Club), Paul Ehrlich (population expert) and David Mixner (civil rights/gay rights activist), who were among the original organizers of the Earth Day "Teach-In" movement.

Uetz continues to be involved in a variety of environmental organizations and projects.

At a local level, I was involved with a group organizing to protect the relatively unspoiled White Clay Creek in Newark, Delaware, says Uetz with pride. One of our members was a lawyer, and was elected to the New Castle County Council, and we were successful in preventing a dam and reservoir. My friend then ran for office at a national level, and I helped on his upstart campaign as an environmental advisor before I left for Illinois and grad school in the fall of 1972. Playing a role in the election of Joe Biden to the U.S. Senate is one of my fondest memories and proudest accomplishments.

Uetz was a biology major as an undergrad at Albion College, and took "Ecology" as his last class in his senior year. The course culminated in a field trip to Loon Lake in upper Michigan, which he describes as an awe-inspiring and eye-opening experience.

I have vivid memories of seeing the massive die-offs of alewife [a type of shad] on the shores of Lake Huron  the result of a complicated, human-induced ecological disaster, an unintended consequence precipitated by the opening of the St. Lawrence Seaway, says Uetz. Connecting the Atlantic Ocean to the Great Lakes allowed the sea lamprey to invade, and eventually decimate populations of lake trout, the natural predator of alewife. As a result of this, populations of alewife grew so large they depleted the available dissolved oxygen supply (already reduced by pollution), and died off in huge numbers, piling up on the shoreline 23 feet deep!

Uetz shares his expertise in spiders with a student.

It was easy to make a direct connection between the ecological principles we learned in class and what people were doing to the planet. After that, I went on to get a Master's, teach for two years and then earn a PhD in Ecology.

Ironically, Uetzs PhD was supported by a grant from the U.S. Army Corps of Engineers as part of an environmental impact assessment on a dam-reservoir-floodplain project. At UC Uetz has taught ecology, conducts behavioral and ecological research, and continues to be involved in a variety of environmental organizations and projects.

"So you could say that Earth Day really shaped my career," Uetz says.

Uetz sees that there are some places where we have lost momentum that had built up in the 1960s and 70s on the environmental front.

At the national level, the erosion of environmental gains as a consequence of overwhelming political power wielded by some corporations and the backlash they have created to protect their economic interests is the biggest setback, he says. Environmentalists have been marginalized and even vilified as tree-huggers and Birkenstocks (and let's not forget the nickname "Ozone Man"). As a result, we have wasted precious time because of doubt and denial regarding global warming, which has been recognized and understood by scientists since the 1980s.

Some of the dire predictions of that earlier time have not come to pass or at least have been forestalled, while at the same time, new and more urgent problems have arisen that were unknown then and that we could not foresee, he continues. The U.S. Environmental Protection Agency [which formed in December 1970], the Clean Air Act, the Clean Water Act, the Endangered Species Act all came from that time as a result of growing environmental consciousness. Despite setbacks over the last two decades, the sense of urgency growing from the undeniable fact of global warming, and the efforts of highly visible leaders like Al Gore (as well as myriads of musicians and celebrities) have resulted in the environment once again being among the primary issues on our political agenda.

Uetz says he is also heartened by the individual and collective efforts that people make on a daily basis  on a local and global level  to recycle, to conserve energy, to create sustainable alternatives, to protect wildlife and biodiversity, and to seek as many ways as possible reduce our carbon footprint.

The importance of environmental awareness, education and the message of conservation and sustainability is a continuing legacy of the original Earth Day.