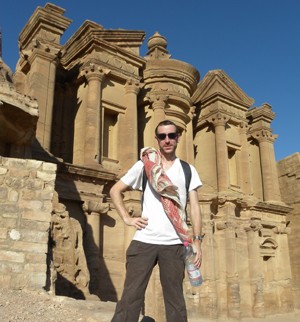 A team of international archaeologists including Christian Cloke of the University of Cincinnati is providing new insights into successful and extensive water management and agricultural production in and around the ancient desert city of Petra, located in present-day Jordan. Ongoing investigations, of which Cloke is a part, are led by Professor Susan Alcock of the Brown University Petra Archaeological Project (

Using a variety of tools and techniques, including high-resolution satellite imagery and optically stimulated luminescence (OSL) dating of soils, Cloke, a doctoral student in the

at UC, and Cecelia Feldman, classics lecturer at UMass-Amherst,

have suggested that extensive terrace farming and dam construction in the region north of the city began around the first century, some 2,000 years ago,

not during the Iron Age (c. 1200-300 BC) as had been previously hypothesized. This striking development, it seems, was due to the ingenuity and enterprise of the ancient Nabataeans, whose prosperous kingdom had its capital at Petra until the beginning of the second century.

The successful terrace farming of wheat, grapes and possibly olives, resulted in a vast, green, agricultural suburb to Petra in an otherwise inhospitable, arid landscape. This terrace farming remained extensive and robust through the third century. Based on surface finds and comparative data collected by other researchers in the area, however, it is clear that this type of farming continued to some extent for many centuries, until the end of the first millennium (between A.D. 800 and 1000). That ancient Petra was under extensive cultivation is a testament to past strategies of land management, and is all the more striking in light of the areas dry and dusty environment today.

Cloke and Feldman will present their findings Jan. 4 at the Archaeological Institute of America Annual Meeting

in Seattle, in a paper titled On the Rocks: Landscape Modification and Archaeological Features in Petras Hinterland. Their research efforts are contributing to a growing understanding of the city, its road networks, and life in the surrounding area.

Dating the start of extensive terrace farming at Petra to the beginning of the common era has important historical implications, according to Cloke, because this date coincides closely with the Roman annexation of the Nabataean Kingdom in A.D. 106.

He explained, No doubt the explosion of agricultural activity in the first century and the increased wealth that resulted from the wine and oil production made Petra an exceptionally attractive prize for Rome. The region around Petra not only grew enough food to meet its own needs, but also would have been able to provide olives, olive oil, grapes and wine for trade. This robust agricultural production would have made the region a valuable asset for supplying Roman forces on the empires eastern frontier.

In other words, said Feldman, successful terrace farming and water management when Petra was at its zenith as a trading center added not only to the citys economic importance but to its strategic military value as well, because there were limited options in the region for supplying troops with essential supplies.

TERRACES FOR FARMING AND DAMS FOR WATER MANAGEMENT

Rainfall in the region occurs only between October and March, often in brief, torrential downpours, so it was important for Petras inhabitants to capture and store all available water for later use during the dry season. Over the centuries, the Nabataeans of Petra became experts at doing so. The broad watershed of sandstone hills naturally directed water flow to the city center, and a complex system of pipes and channels directed it to underground cisterns where it was stored for later use.

Perhaps most significantly, said Cloke, its clear that they had considerable knowledge of their surrounding topography and climate. The Nabataeans differentiated watersheds and the zones of use for water: water collected and stored in the city itself was not cannibalized for agricultural uses. The citys administrators clearly distinguished water serving the citys needs from water to be redirected and accumulated for nurturing crops. Thus, extensive farming activity was almost entirely outside the bounds of the citys natural catchment area and utilized separate watersheds and systems of runoff.

These initial conclusions from the first three seasons of BUPAP fieldwork promise more exciting discoveries about how the inhabitants of Petra cultivated the outlying landscape and supported the citys population. The presence of highly developed systems of landscape modification and water management at Petra take on broader significance as they offer insight into geopolitical changes and Roman imperialism.

Dam and water pipe at Petra.

Financial support for this research was provided by the Curtiss T. and Mary G. Brennan Foundation, the Joukowsky Institute for Archaeology and the Ancient World at Brown University, and the Weidenfeld Research Fellowship. Research support in Jordan came from the Jordanian Department of Antiquities and the American Center of Oriental Research. UCs Louise Taft Semple Fund provided additional support for Christian Clokes research.