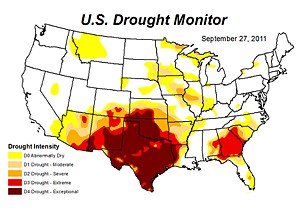 UC Geographers Develop a System to Track the Dynamics of Drought

University of Cincinnati researchers are at work tracking drought patterns across the United States. Qiusheng Wu, a doctoral student and research assistant for the UC Department of Geography, and Hongxing Liu, a UC professor and head of the Department of Geography, will present details this week at the annual meeting of the Association of American Geographers (AAG) in Tampa, Fla.

To trace the dynamics around agricultural drought, the UC researchers implemented an Event-based Spatial-Temporal Data Model (ESTDM) to detect, track and monitor conditions. The framework organizes data into objects, sequences, processes and events.

The data was collected from the European Space Agencys (ESA) Soil Moisture and Ocean Salinity (SMOS) satellite, which was the first of its kind dedicated to measure moisture near the surface of the soil. The study focused on four years of data (2010-2014), which included the devastating Texas drought in 2011 and the 2014 California drought.

The satellite uses an L-band (1.4 Ghz) passive microwave radiometer to analyze the spatial and temporal variations of soil moisture and ocean salinity. Recent studies have shown that many historical drought events in the U.S. are closely related to La Niña, a phenomenon known for its periodic cooling of sea surface temperatures in the tropical Pacific Ocean. So in addition to measuring soil moisture for drought monitoring, it is also important to measure ocean salinity, explains Wu.

The satellite can penetrate the Earths surface up to 5 centimeters, providing a soil variable for each pixel, which represents 25 kilometers. The satellites data collection occurred over a three-day rotation.

The researchers were examining patterns of spreading drought to develop predictions for future drought events.

By studying the soil moisture data from the satellite, we can see where the droughts begin and end, and what might indicate patterns of how it can spread over one large area. The pattern might be used to predict the drought in another location, so that those areas could take precautions to avoid the impact of an oncoming drought, says Wu.

The Intergovernmental Panel on Climate Change (IPCC)  known as the leading international organization for the assessment of climate change  predicted in 2012 that droughts would intensify in some seasons and in many regions worldwide in the future due to reduced precipitation and/or increased evapotranspiration.

Drought ranks among the most costly of all natural disasters. It has wide-ranging impacts on many sectors of society, affecting agriculture, economics, ecosystems services, energy, human health, recreation and water resources. By predicting the timing, severity and movement of drought events, we can provide fundamental information for planning and management in developing a response plan, says Wu.

Future research will involve data gathered from a satellite that NASA is launching toward the end of the year, the Soil Moisture Active Passive (SMAP) satellite. The SMAP satellite integrates an L-band radar (1.26 GHz) and an L-band (1.41 GHz) radiometer as a single observation system combining the relative strengths of active and passive remote sensing for enhances soil moisture mapping. The combined radar-radiometer-based soil moisture product will be generated at about an intermediate 9-km resolution with three-day global revisit frequency. Wu says the accuracy, resolution and global coverage of SMAP soil moisture and freeze/thaw measurements would be invaluable across many science and applications disciplines including hydrology, climate and carbon cycle, and the meteorological, environmental and ecology applications communities.

The Association of American Geographers (AAG) is a nonprofit scientific and educational society that is dedicated to the advancement of geography. The meeting will feature more than 4,500 presentations, posters, workshops and field trips by leading scholars, experts and researchers. The AAG annual meeting has been held every year since the association's founding in 1904.