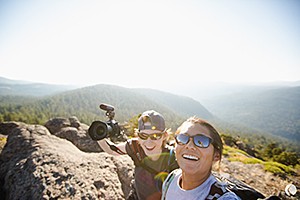 Since the courses inception with a three-year UC Forward grant, it has produced three 90-minute documentaries that air nationally on NBCs Universal Sports Network. Each focuses on the Gold Rush Expedition Race, one of the worlds premier expedition races that feature an international field of 50 elite athletes trekking, mountainbiking, climbing and kayaking along a grueling 275-mile course in Californias Sierra Nevada Mountains. The winning team goes on to compete in the Adventure Racing World Series (AWRS) World Championship.

Since 2012, the course has enrolled over 90 students from nine different academic programs at the College-Conservatory of Music (CCM), the College of Design, Architecture, Art, and Planning (DAAP) and the McMicken College of Arts and Sciences.

Initially conceived by CCM Professor Kevin Burke and Brian J. Leitten, an alumnus and professional TV producer and director, the project is now co-taught by Associate Professor Yoshiko Burke of DAAPs School of Design  and it involves professional guidance and expertise from Assistant Professor Lorin Parker of CCMs Electronic Media Division. Both Burke and Leitten advise the project, providing professional guidance and feedback to the students during all phases of the documentary's development.

The Production Master Course was first funded by a three-year grant from the UC Forward Collaborative, an initiative that supports experiential learning and is part of the UC Academic Master Plan. "The idea was to totally re-invent the college classroom focusing interdisciplinary teams of faculty and students on real world projects," said President Ono.

Over the past three years, the grant has made it possible for students to travel to California and work alongside educators and media professionals, who mentor them on proper equipment technique, story structure and workflow prior to the race. During the race, the professionals take on a supporting role for student-led teams of audio mixers, camera operators and producers, constructively critiquing their footage and creative decisions.

"By interacting with both professional mentors and students from various disciplines," Burke said, "the project better prepares students for professional careers in the television and film industry. Being involved in one of the first student-produced documentary series to air nationally looks good on a student resume as well."

The presidential investment in the UC Production Master Class will allow the production to continue beyond its initial three-year grant period and represents Ono's ongoing support of interdisciplinary digital media projects and experiential learning at the University of Cincinnati. For more information about the UC Production Master Class and the Gold Rush Expedition Race Documentary Series, please see