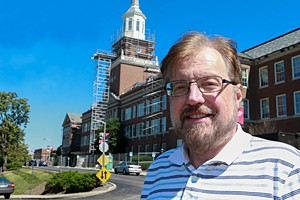 A Look into Why the Horrifying Is So Very Intriguing

Its an age-old question thats also very timely as we approach the season of haunted houses, scary movies and encounters with Halloween zombies and ghouls stopping by to beg for candy. Why is horror so popular? Why does something strange or even repulsive still make us want to look?

Gary Vaughn, a University of Cincinnati associate professor of English, digs into the underlying themes of the popular TV show, American Horror Story: Freak Show to explore these questions. Vaughn is among the UC faculty to be well represented at the conference of the

Vaughns presentation examines the FX networks American Horror Story: Freak Show in terms of its danger and allure of monsters as well as what he calls the shows bait-and-switch appeal to its audience that starts out in voyeurism but ends in reflection.

While the plot landscape of Freak Show may have more dead ends than a new subdivision and the blunt sexuality may make us squirm in horror more intellectual than psychological, these writing choices are, I believe, deliberate attempts to make us, the audience, confront our own stereotypes about difference and disability, says Vaughn.

Vaughn explains that the beginning of this television viewing experience is similar to that of audiences that used to pay to take a seat at the carnival side shows of the 19th century  shows that featured the bearded lady or two-headed animals. Theres an attraction to oddities outside of our everyday experience.

As the series unfolds, were forced to confront what we consider issues of freakishness, Vaughn continues. The freaks in the series have their own sense of justice, their own sense of trust  sometimes misplaced  and their own ethics. In many instances, they demonstrate more admirable human qualities than the towns so-called ordinary characters, explains Vaughn.

Vaughn says while the show has been criticized for its over-the-top performances, disjointed plots and graphic sex and violence, Freak Show also forces audiences to consider the out of the ordinary as part of our social desire to separate people that we see differently than ourselves, including the disabled or the abnormal.

Freak Show forces us to confront our own intellectual fears about difference, about diversity and about fears of change, says Vaughn. It takes us from the voyeuristic appeal at the beginning of the season to getting us to pause and think about who might be the real freak  whats so bad about being abnormal or an anomaly?

The mission of the Popular Culture Association/American Culture Association is to promote the study of popular culture throughout the world through the establishment and promotion of conferences, publications and discussion. The PCA/ACA actively tries to identify and recruit new areas of scholarly exploration and new and innovative ideas.