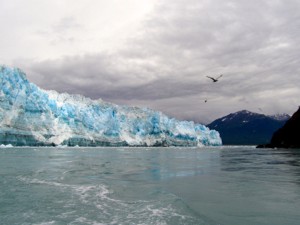 For millions of years global climate change has altered the structure and internal movement of mountain ranges, but the resulting glacial development and erosion can in turn change a mountains local climate. The degree of this cause-and-effect relationship has never been clearly observed, until now.

Based on research led by University of Cincinnati geologist Eva Enkelmann in the St. Elias Mountain Range  located along the Pacific coastal region of North America  the way a mountain range moves and behaves topographically can also change and create its local climate by redirecting wind and precipitation. The repercussions of these changes can in turn, accelerate the erosion and tectonic seismic activity of that mountain range.

Based on her findings, Enkelmann shows clear evidence for a strong relationship between global and local climate change and a mountains internal tectonic plate shifts and topographic changes.

Enkelmann, an assistant professor in the University of Cincinnati Department of Geology, was among several UC researchers and thousands of geoscientists from around the globe presenting their findings at the 2015 Annual

This research also was published in July in the journal Geophysical Research Letters titled,

To understanding how mountain structures evolve through geologic time is no quick task because we are talking millions of years, says Enkelmann. There are two primary processes that result in the building and eroding of mountains and those processes are interacting.

Looking at the St. Elias Mountains in particular, Enkelmann notes how dry it is in the northern part of the mountain range. But the precipitation is very high in the southern area, resulting in more erosion and material coming off the southern flanks. So as the climate change influences the erosion, that can produce a shift in the tectonics. This has been suggested in earlier studies based on numerical and analytical models, however, it had not yet been shown to have occurred over geologic times in the real world.

Enkelmann synthesized several different data sets to show how a rapid exhumation occurred in the central part of the mountain range over four to two million years ago. This feedback process between erosion and internal tectonic shifting resulted in a mass of material moving up toward the surface very rapidly.

While the Earth was much warmer millions of years ago, glaciers still existed in the high altitudes. However, 2.6 million years ago the Earth experienced a shift to a colder climate and glaciation intensified. Existing glaciers grew larger, froze solid, covered the area and did not move.

Enkelmann says the glaciers today are wet-based and are moving, very aggressively eroding material around and out, and in the case of her observation, into the Gulf of Alaska. The tectonic forces (internal plates moving toward one another) continue to move toward Alaska, get pushed underneath and the sediment on top is piling up above the Yakutat plate.

Adding to the already complex effects of climate change, these processes essentially work against each other.

The movement of glaciers can compete with the internal buildup and develop a feedback process that is very rapid and ferocious. Scientists have suggested that the Himalayas, European Alps and mountains in Taiwan were caused by the same competing reactions as those Enkelmann has observed in southeastern Alaska.

In Enkelmanns observation, the climate-driven erosion can influence the tectonics and change the motion of the rocks in that area. This makes studying the St. Elias Mountain Range particularly ideal because this area is very active tectonically, with strong glacial erosion. As an example, she cites the Great Alaskan Earthquake of 1964  the worlds second largest earthquake recorded to date  that also resulted in a tsunami.

In 1899, there were two big earthquakes in a row, an 8.1 and an 8.2 magnitude, says Enkelmann pointing to a photo of the resulting shoreline lift that still stands today. These earthquakes resulted in up to 14 meters of co-seismic uplift on the shore, so the shoreline basically popped up 14 meters (45 feet) and it happened immediately.

Our biggest concern today is the continued potential for earthquakes that can also result in tsunamis,

Enkelmann appreciates the challenge of collecting samples here because this range has the highest peaks of any coastal mountain range and is only 20 kilometers from the Pacific Ocean, but she points out that it is a tough area to study because of the big ice sheets.

So as geologists, we go to the area and take samples and do measurements in the field on the mountain ranges that stick out, says Enkelmann. One approach is to sample the material that comes out of the glaciers that has transported the eroded sediment and analyze that sediment.

By going to all of these individual glaciers, we can get a much better understanding of what has happened and what was moved on the entire mountain range.