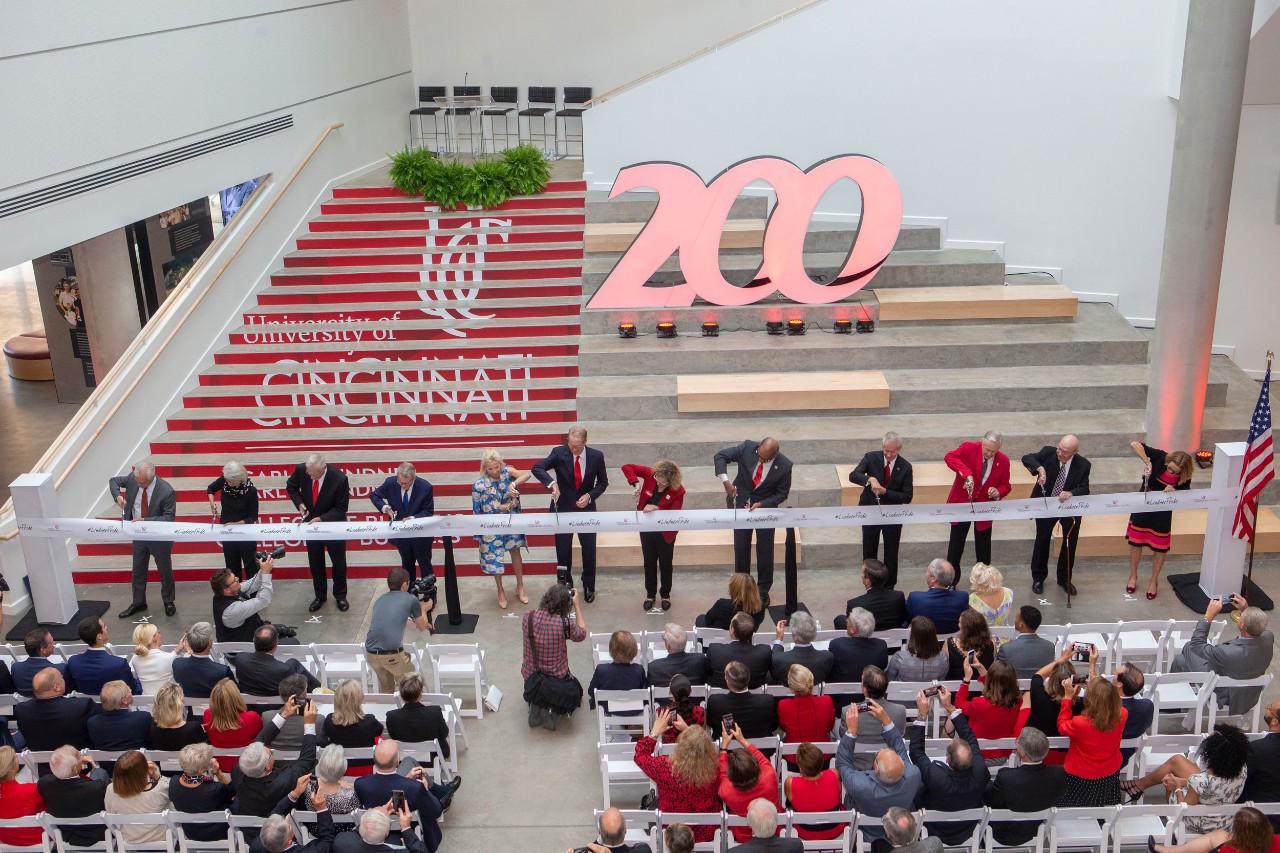 The third week of September had been circled, underlined and highlighted in calendars across the Carl H. Lindner College of Business and the University of Cincinnati campus for quite some time. The college’s new home at 2906 Woodside Drive was abuzz from Sept. 18 through Sept. 21 to host the many supporters, donors, alumni, friends and guests of the college to celebrate its official ribbon-cutting and grand opening through a series of high-energy events.

The main event, the ribbon-cutting ceremony, was held on Thursday, Sept. 19. Members of the UC Marching Band and Cheer Team greeted hundreds of visitors, students, faculty and staff they entered the new Lindner Hall on red and black carpets. DeWine, Pinto, Lewis, Craig and Carl Lindner III each gave remarks from a podium on the building’s grand staircase. Attendees watched seated in chairs on the atrium floor or by standing along the mezzanines of the three upper floors.

The past several years have been leading up to this occasion. While this is the launch of a new era for the Lindner College of Business, it’s also a time to express our heartfelt thanks to our supporters and all who enabled this opportunity.

“Two years, four months and two days ago, we stood out on Sigma Sigma Commons to break ground on a new Lindner Hall,” said Pinto during his remarks. “As we gathered under that tent, we visualized what the new building would look like. But today, we don’t need to use our imagination anymore.

"This new facility adds luster to our acclaimed campus,” continued Pinto. “It gives us a world-class building for our students, faculty and business community to thrive. It enhances the momentum of the college’s astounding growth in enrollment and gains in rankings and reputation. It emboldens our faculty, staff and students to aspire for greater impact.”

“What always impressed me about Mr. Lindner is that he was always looking toward the future,” said DeWine. “He wanted to know where we were going. He had ideas about how we could move our state and country forward. That vision is something for us all to remember today.”

Carl and Craig Lindner each spoke about their father’s legacy and how the new building underscores the college’s importance to the regional business community.

“We can see how this building will transform learning and teaching for generations of Lindner students,” said Carl Lindner III, who serves as co-chief executive officer/co-president and director of American Financial Group and CEO and majority owner of FC Cincinnati. “My dad valued people and relationships. The contemporary and open design of this building encourages relationships and collaboration and facilitates innovation and creativity.”

“We are privileged to partner with the Lindner College of Business through co-op and mentoring programs — at any given time we employ more than 70 co-ops or interns,” said Craig Lindner, who serves as co-chief executive officer/co-president and director of American Financial Group. “This is a visionary learning environment that will help the business school climb in rankings and help bolster the University of Cincinnati and the region as a hub of innovation and exceptional talent. Thank you for this great honor today for my father and for our family.”

My dad valued people and relationships. The contemporary and open design of this building encourages relationships and collaboration and facilitates innovation and creativity.

On Friday, Sept. 20, members of the Business Advisory Council (BAC) convened in the new Lindner Hall for their semiannual meeting. The BAC is comprised of business leaders from the Greater Cincinnati region and national business community who represent small, medium and large companies in public, private or family-owned sectors. Members are appointed to three-year terms and typically meet twice a year to advise college leadership to strengthen the quality of programs and the college’s overall reputation.

Following the BAC meeting was another — although more intimate — ribbon-cutting for Lindner Career Services Center, located in the Bourgraf family executive offices in the new Lindner Hall. Elroy (El) Bourgraf, BBA '54, donated $1 million to the college because of the significant impact UC's co-op program had on his life.

“The core mission of what we do is to connect all Lindner students with employers for both Lindner Professional Experiences (co-ops and internships) and full-time opportunities,” Lindner Career Services Director Kevin J. Hardy shared during his remarks. “This generous gift from El and Elaine Bourgraf provides the space to help us better serve students as we connect them to potential employers.”

Nine interview rooms are included in the new Career Services Center, which employer partners can use when interviewing Lindner students.

“As one of the many Lindner students who benefit from this very center that we are celebrating today, I would argue that being a student at this time is more exciting than any other time in the university’s 200 year history,” said Chandler Rankin, BBA '20, undergraduate student body president.

Finally, Saturday was a day especially for Lindner alumni. Nearly 200 attendees gathered in the atrium and main auditorium to reconnect with former classmates, meet Dean Lewis and break into smaller groups to hear from different students about their unique experiences pursuing a business education at Lindner.

“UC’s long and proud history is not so much about an institution, but rather about people with bold ideas, who do bold things,” Phil Collins, member of the UC Board of Trustees, shared with the alumni in attendance. “As we celebrate 200 years of the University of Cincinnati and the start of this new chapter for the Lindner College of Business, we also look ahead to what we can do next.”

Alumni Open House guests could embark on interactive tours throughout the building for hands-on examples of classroom technology such as the simulated trading floor in the Johnson Investment Counsel Investment Lab. They could also visit the Lindner Legacy area, a designed space dedicated to celebrating the life and legacy of Carl H. Lindner.

About the Carl H. Lindner College of Business

For more than 110 years, the Carl H. Lindner College of Business has been committed to developing the next generation of business leaders. Through personalized career coaching and experiential learning, Lindner students graduate with a competitive advantage in the workforce and are strongly positioned to address a multitude of today’s global business challenges. The college has not only served as a catalyst for innovation and cutting-edge research, but its programs have also earned national acclaim in several academic areas.

The University of Cincinnati and its affiliates spent a record $615 million on research in fiscal year 2022, demonstrating their commitment to discovery and innovation.