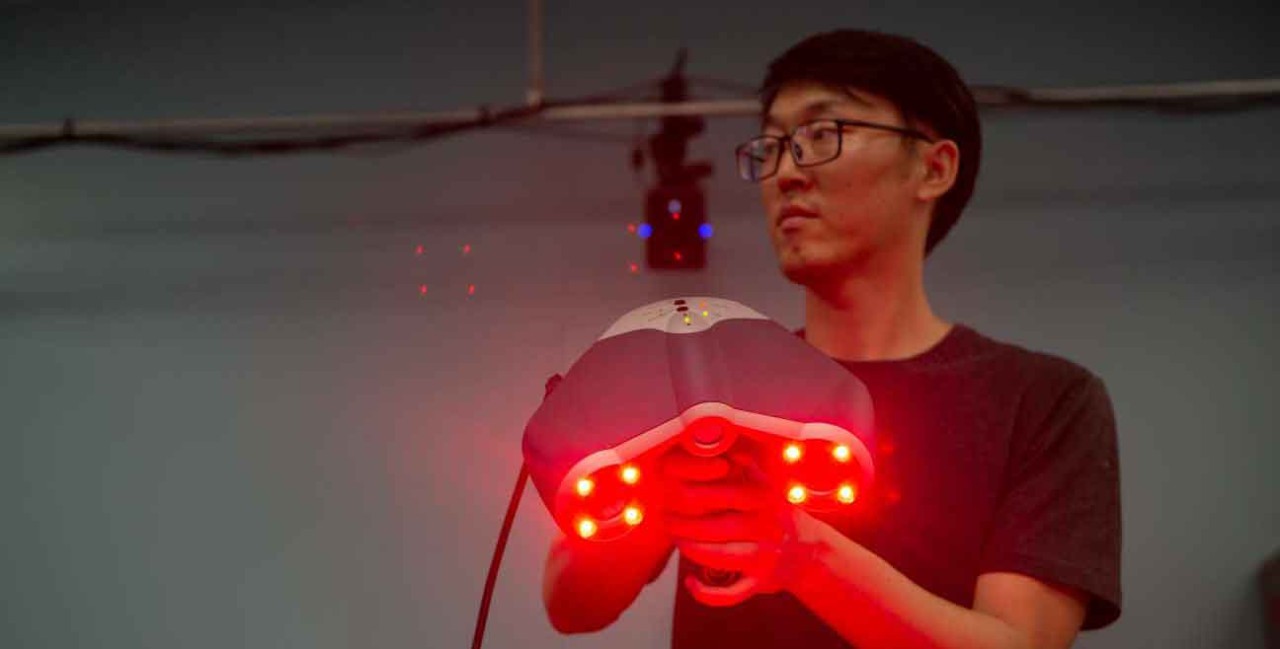 When satellites break, which is surprisingly often, there isn’t much you can do about them.

They become expensive and dangerous flotsam, orbiting Earth for years or generations until gravity eventually draws them to a fiery death in the atmosphere.

University of Cincinnati professor Ou Ma is engineering robotics technology to fix orbiting satellites in his Intelligent Robotics and Autonomous Systems Lab. He envisions robotic satellites that can dock with other satellites for repairs or refueling.

The project demonstrates UC's commitment to research as described in its strategic direction, Next Lives Here.

Ma said a million things can go wrong with every satellite launch. But for most of those glitches, nothing can be done once the satellite is deployed.

A $400 million Intelsat satellite the size of a small school bus malfunctioned this year after reaching a high elliptical orbit, according to SpaceNews. A few of the first 60 Starlink satellites launched by SpaceX malfunctioned as well this year, but their low Earth orbit is designed to decay to oblivion in just a few years.

Perhaps the most famous satellite glitch of all time occurred in 1990 when the Hubble Space Telescope was deployed only for NASA to learn its pricy mirror was warped. A subsequent repair mission aboard the space shuttle Endeavor in 1993 replaced the mirror to provide astonishing images of the universe.

Faulty satellites have dogged most international space programs from Japan to Russia. The problem isn’t limited to Earth orbit. In 1999, a NASA orbiter crashed into Mars because engineers used pounds instead of metric newtons in thruster software. The thrusters fired with four times less force than anticipated and the spacecraft’s orbit was critically low.

The inability to repair satellites becomes a more pressing concern with every launch, Ma said.

“Big commercial satellites are costly. They run out of fuel or malfunction or break down,” Ma said. “They would like to be able to go up there and fix it, but nowadays it’s impossible.”

NASA is hoping to change that. In 2022, the agency will launch a satellite capable of refueling other satellites in low Earth orbit. The goal is to intercept and refuel a U.S. government satellite. The project called Restore-L is expected to provide proof of concept for autonomous satellite repairs, NASA said.

A Colorado company called Maxar is providing the spacecraft infrastructure and robotic arms for the project.

An illustration of NASA's Restore-L mission to launch satellites that can repair or refuel other satellites in low Earth orbit. Graphic/Maxar

Most satellites fall into disuse because they exhaust their supply of fuel – not from a critical malfunction, said John Lymer, chief roboticist for Maxar. Refueling alone would be a boon for the industry, he said.

“You’re retiring a perfectly good satellite because it ran out of gas,” he said.

Lymer said he’s familiar with the work Ma is doing in his Intelligent Robotics and Autonomous Systems Lab.

“Ou Ma, who I’ve worked with for many years, works on rendezvous and proximity organization. There are all kinds of technical solutions out there. Some will be better than others. It’s about getting operational experience to find out whose algorithms are better and what reduces operational risk the most.”

Lymer said the industry is poised to take off, creating a boon for aerospace engineering students like those at UC.

In Ma’s lab, students are working on the automated navigation that satellites will need to dock with other satellites in space. It’s tricky business since an inadvertent bump in zero gravity can send one or both vehicles tumbling.

UC professor Ou Ma wears virtual-reality goggles in his lab. Ma is working on the fundamental technology for satellites to fix other satellites in space. Photo/Andrew Higley/UC Creative Services

“It’s easy to make it tumble in space because nothing holds it. Then the satellite becomes even more difficult to grab. If it starts to tumble, it can tumble forever basically. It won’t stop on its own,” Ma said.

Engineering simulations can predict the dynamic behavior of a target satellite so an approaching satellite can safely arrest it, he said.

“We have simulation tools so from there we can accurately predict its behavior,” he said.

“To grab something in space is really difficult. And grabbing something that’s tumbling in space is even more difficult,” Ma said. “You have to be very careful to predict the dynamic behavior and perform precise controls so you can 'de-tumble' the satellite and gently grab it."

Ma compared remote satellite navigation to the latest driverless car technology. In his lab, students test these algorithms using a shoebox-sized robot that moves around on what looks like an air hockey table. But it’s the robot that supplies the cushion of air like a miniature hovercraft to mimic the microgravity environment of space.

Once the technology is proven, NASA or a commercial company would take it to the next step.

“Right now it’s just a test bed basically. It has a range sensors, cameras and an inertial measurement unit you can’t see underneath,” he said. “It moves with actuators and eight directional thrusters to propel it around the table.”

While it’s limited to moving on an X and Y axis, the navigational concepts can be applied to three dimensions, Barth said.

Ma is also working on the complicated robotics required for a satellite to make remote repairs. His lab has several industrial-sized robotic arms with seven joints that give them a full range of motion.

The most useful repair satellite will be able to complete multiple tasks, Ma said. During his career, he has worked on various projects relating to the robotic arms aboard the International Space Station and the former space shuttle program. His signature is floating in orbit on a piece of equipment aboard the space station.

“This robot will be doing some control testing of algorithms and sensor technology,” Ma said, pointing to a human-sized robotic arm in his lab. “We’re not simulating a specific mission but the tested new technology that can be used in future missions.”

Students in Ou Ma's Intelligent Robotics and Autonomous Systems Lab are getting robots to work independently but collaboratively with other robots to complete tasks. Photo/Andrew Higley/UC Creative Services

In his lab, Ma and UC senior research associate Anoop Sathyan are developing robotic networks that can work independently but collaboratively on a common task.

For their latest study, Ma and Sathyan put a group of robots to the test with a novel game that uses strings to move an attached token to a designated spot on a table. Since the robots each control just one string, they need the other robots’ cooperation to move the token to the right spot by increasing or relaxing tension on the string in response to each robot’s actions.

Their results were published this month in the journal Robotica.

The researchers found that by using five robots, the collective could accomplish the task even if one of the robots malfunctioned.

“This will be especially true for problems with larger numbers of robots where the liability of an individual robot will be low,” the researchers concluded.

Ma has had an abiding interest in space for most of his career. At New Mexico State University, he designed a mechanical harness that mimicked low gravity. Students wearing the harness could “moon bounce” on a treadmill with one-sixth the gravity of Earth or make sky-high dunks on a basketball rim.

Ma said fixing satellites in space is becoming a growing priority in the aerospace industry because of the high cost of failure.

“It’s not very practical yet. The technology is still being developed,” Ma said. “But I envision in five or 10 years when the technology is mature, they will begin commercializing this to go out and fix satellites.”

Companies will have to build satellites with remote repair or service in mind. Most satellites today are too fragile even to grasp remotely without risking damage.

“So many satellites couldn’t be serviced today even if you wanted to. New satellites will need access doors to accommodate basic repairs and docking targets to help with the approach,” student Barth said.

UC aerospace engineering students work on a robotic hovercraft that floats on a cushion of air. The lack of friction helps mimic conditions in space. Photo/Andrew Higley/UC Creative Services

Time is of the essence. With every launch and every failed satellite, low Earth orbit is approaching the Kessler effect, the theory by Donald Kessler that satellite collisions could create a cascade of debris hampering the safety of future launches as depicted in the fictional 2013 Oscar-winning film “Gravity.”

“Think of the speed of these objects. We’re not talking about highway speed or even aircraft speed. They’re traveling at 17,000 mph,” Ma said.

Ma said space is a field dominated by government agencies for the purposes of exploration and discovery. But the field is at the cusp of commercialization, which promises a wealth of aerospace engineering jobs for graduates who want to pursue them.

“Eventually, the commercialization of space will be a big industry,” he said.

His research is helping to push the frontiers of knowledge that will pave the way for future space projects.

“We’re not developing an entire mission. We’re developing the underlying technology,” Ma said. “Once the technology is proven, NASA or a commercial company would take it to the next step.”

At a university where Neil Armstrong worked as an aerospace engineering professor, first steps can be big ones.

At the University of Cincinnati, aerospace engineering students will launch their own satellites into space and are helping NASA plan the next mission to Mars. Students in UC's College of Engineering and Applied Science tackle real-world problems. Explore programs at the graduate and undergraduate level.

Located within the 1819 Innovation Hub — the nerve center of the Cincinnati Innovation District — the Venture Lab provides resources and mentoring to help innovators launch scalable startups.